They grow up so fast.

This year will mark the third birthday for everyone's favorite 6-second video app, Vine. And while the platform remains something of a quiet achiever in the social media space, it's steadily continued to expand - and much like its parent company Twitter, it's also become a key player in the wider dissemination of pop culture influences, with many of the best known trends and memes originating from the short video service.

In fact, some Vine-originated trends have gone huge - one of the best recent examples was Atlanta hip-hip artist Silento, whose song "Watch Me (Whip/Nae Nae)" become a massive, international hit after going viral on Vine, with thousands of people uploading their own takes on the song's ultra-catchy chorus.

This is just one example of the role Vine now plays in generating meme-worthy, viral sensations, with the time constraints of Vine content pushing creators to come up with catchy, engaging and entertaining content contained within a very limited span. That impetus, in itself, works with the wider trends of video and content online - for example, videos now autoplay on Facebook and Twitter as you scroll by, which makes it increasingly important for those posting video content to create material that captures the viewer's imagination within seconds. Take too long to get to the point and your audience will just roll right by - in the attention economy, Vine serves as the perfect training ground for the next generation of video creators.

To mark the platform's third year of existence, Vine's released a collection of the top Vine videos of 2015 - including the most looped Vine of the year (a Vine from the day of the Paris terror attacks which in which a bomb is heard going off mid-play at a soccer match) and videos that sparked some of the biggest trends, like "What Are Those?" and "Duck Army". 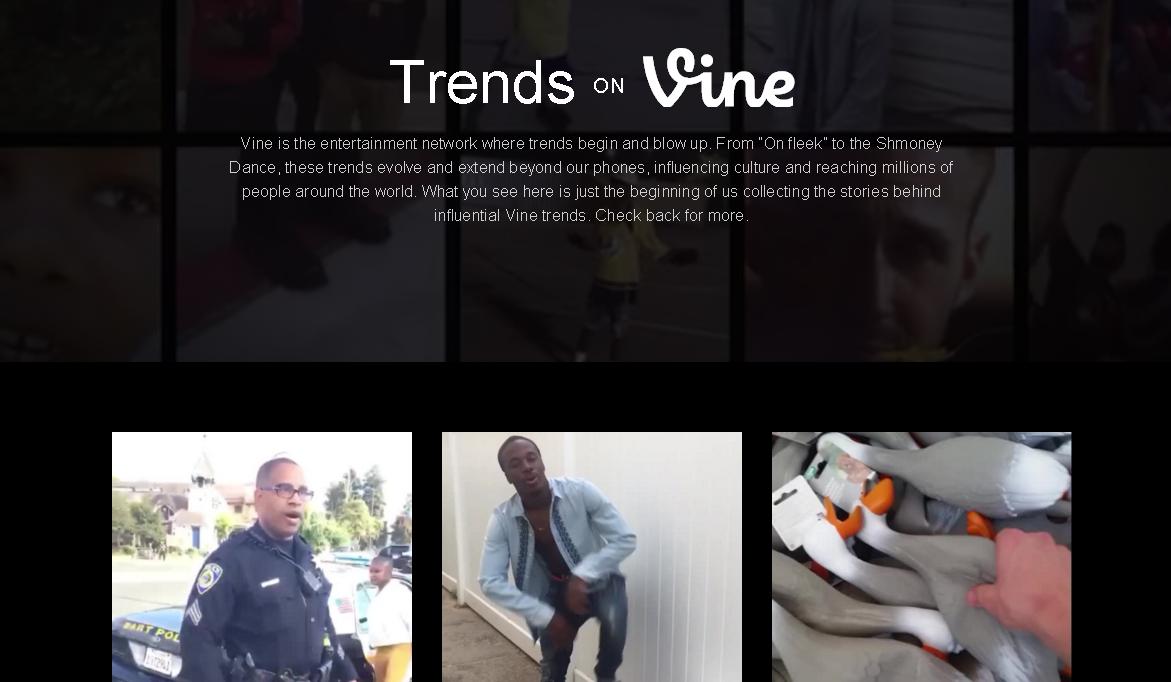 Here, you can scan through all the trends and memes that have originated from Vine - clicking on any of the cover images will take you through to a collection, starting with the Vine which started it all and going on to a selection of related Vines that riff on the original theme. It's a great way to get some context into how Vines spread, and where they started from in the first place.

So next time you see a Vine trend and you wanna' make sure you're not left out of the loop, you can just go to "Trends on Vine" and do a quick catch-up, ensuring you've got the full context on the latest meme.

Throughout the year, Vine's continued to add some interesting and innovative features to refine and improve the user-experience. It doesn't get as much hype as other players, but Vine does play a key role in social media culture and has become an essential platform for many creators, particularly given the explosion of video content in the past 12 months. What the future holds for Vine isn't clear - they've yet to introduce any monetization options or break through to become a wider communications or interactivity platform. But Vine is important, and can provide amazing reach and performance results for those who take the time. Through the work of influential users and improved brand integrations with those creators - made possible through Twitter's influencer platform Niche - it's possible that Vine could be poised for big growth in 2016.

How that plays out exactly is a whole other story.