Today, via the official Twitter blog, the platform has announced a new user discovery option to help people find accounts more relevant to them.

As you can see, the process, is relatively straight-forward - you click on the little blue person icon and it takes you to a screen which shows you a listing of accounts you might like to follow, with the additional context of why those accounts are being recommended to you ("Because you follow..."). 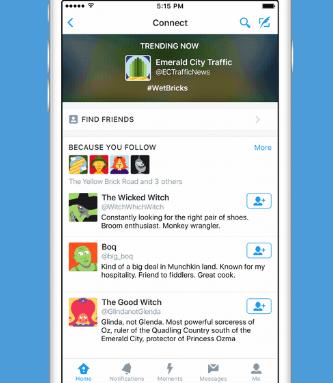 There's also a "Trending Now" option featured prominently at the top of screen to keep you up to date with the latest, most popular accounts (Twitter is, after all, a 'news' app now), and you can also more easily connect to friends and family by clicking on the 'Find Friends' option, which will sync your address book. If someone in your address book joins Twitter, you'll also get a notification.

It seems like a small addition, a minor update that can help improve people's on-platform experience. But it's not.

The addition of an improved user discovery option, based on your, individual, on-platform actions, is crucial to Twitter's ongoing relevance. Why? Because social media, overall, is becoming more personalized, which, in turn, is increasing user expectation for experiences tailored to them and their actions specifically.

While the addition of improved follow recommendations, and the processes in which to access them, seems like a simple change, there's more to it than that - and it's likely to be an area where we see more focus from Twitter moving forward.

Earlier this year, when analyzing the various issues and challenges Twitter faces in its uphill battle to get back on track, we noted that Twitter could do better at personalizing the user experience, particularly in regards to on-boarding. Twitter's on-boarding process has been highlighted by various commentators as an issue, but specifically, on the of the core problems is that Twitter doesn't make it easy for new users to connect with content that's of relevance to them.

Here's an example - when you sign up for a Twitter account you're given a listing of topics from which you can select those that are of interest to you, providing Twitter with an idea of the type of content you'd like to see on the platform. This is the entire listing of topic options for a new user (in Australia): 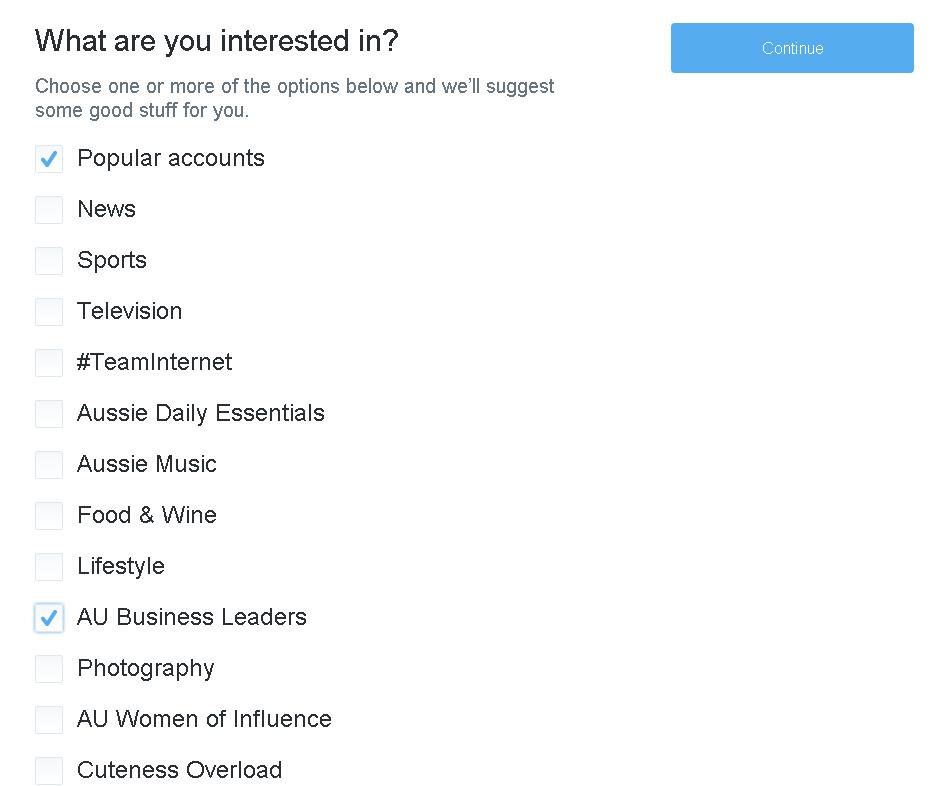 Those are fairly generic - I'm actually not sure I'm interested in any of them - and from that, Twitter tries to work out the accounts you should follow to get the most out of your Twitter experience. 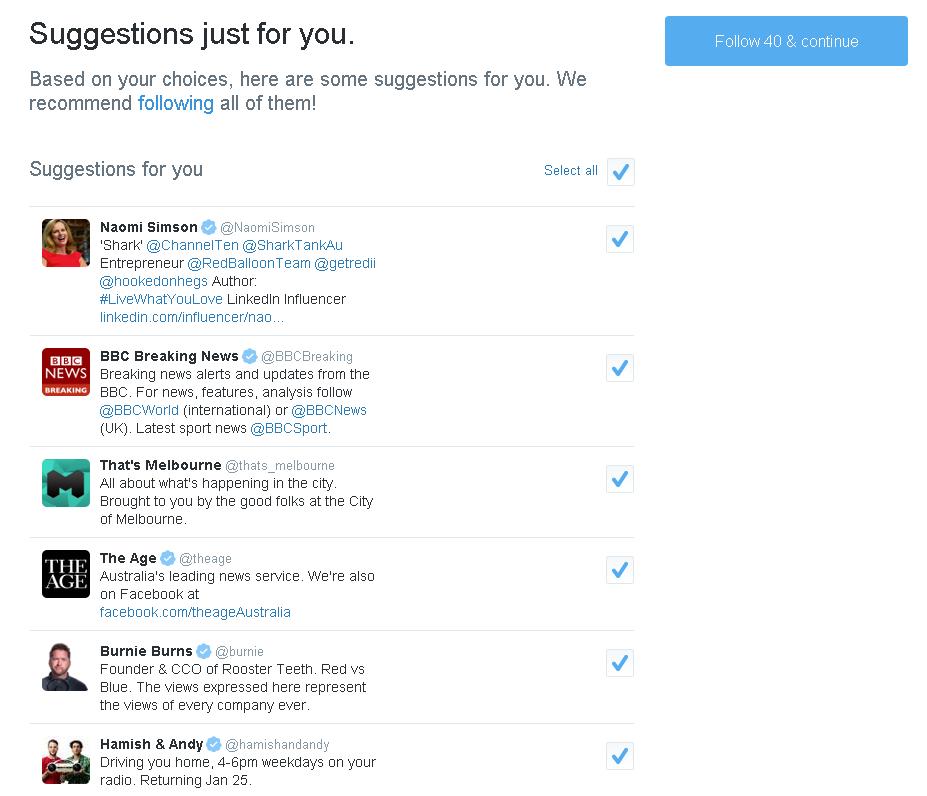 Again, very generic - I follow a heap of social media marketing folk, relative to my interests, yet had I come to Twitter fresh, seeking to find these voices, and based on the tools available to me via the on-boarding process, this is the listing I'd get; a TV personality, BBC News, Melbourne (my home town) tourist info, a newspaper, etc. These are all way too generic - if Twitter wants to improve the user experience and better showcase what insights and value Twitter can offer, this seems an obvious point to start.

The same problem exists after you've joined - if you ever look at your 'Who to Follow' listing, it's also very generic, rarely do I find much value there, though I have noticed it getting a little more focused of late. The recommendations seem to be getting a little more intuitive, more guided by my on-platform actions. This is something Twitter needs to focus on.

Getting to Know You

While there's been alot of noise about Facebook's infamous News Feed algorithm and how it takes control away from the user in terms of what they see, the data shows that their system works. Facebook's active user count continues to grow, as does time spent on platform per user. Facebook's algorithm works because it's highly personalized, it's relative to what you do. And because it works, because it enables Facebook to uncover the content most relevant to each user and filter out the noise, it's also, subconsciously, increasing our expectation of the same on other platforms.

This is why Twitter needs to catch up. It's harder to focus Twitter's real-time stream through an algorithm, for sure, because it is real-time - what's happening right now is what people want to get a feel for via tweets. Because of that live focus, it's more difficult for Twitter to filter their stream quickly, though the switch to an algorithm-fuelled system to uncover the most relevant tweets while you were away appears to be delivering some positive results (only 2% of users have opted out of the timeline thus far).

But as noted, where they can use their data resources is in their recommendations on who to follow - Twitter can better attune their suggested accounts listings to be more personally relevant, more aligned with each users' actually on-platform activities. And given they're already using algorithms to better match people to relevant tweets, they're already collecting data on the content that's likely of most relevance to you.

This is why today's announcement is significant. Yes, much of the functionality on offer has always existed, but it's in the detail of how the new system will highlight accounts for you to follow that the most relevant factor lies:

"To give you the best recommendations - which we'll continue to refine over time - we look at who you already follow, Tweets you like, popular accounts in your local area, what's happening in the world right now, and more. We'll also let you know exactly why we're showing you each recommendation."

Twitter needs to ensure that they're offering more tailored, intelligent recommendations and options in this regard - I suspect Twitter may even look to expand this new section to include relevant tweets that you might be interested in, based on your on-platform actions. As other platforms become more aligned to each individual's actions, and utilize that data to help them discover more personally relevant content, Twitter too needs to catch up. Moments was an attempt to solve this by highlighting relevant content around events, where users can choose the topics they're interested in, but that system still relies on users actively seeking the content out - if Twitter can utilize their data resources to create more intelligent, intuitive recommendations on who to follow and content you might like - and those recommendations are right - that will go a long way towards boosting the relevance of the platform, and engagement rates as a result.

And given Twitter stock has now fallen to its lowest level ever, a boost is exactly what the micro-blog giant needs.

The Connect tab is rolling out today to everyone on Twitter for iOS and Android once you update your app to the latest version you'll be prompted to check out the new tool.