One of the biggest names in peanut butter is Skippy. Founded in California in 1933, Skippy is one of the best-selling peanut butter brands in the world. The company has effectively changed perceptions of peanut butter, establishing it as an ingredient in main courses, not just as a spread, a success which has translated particularly well to the Chinese market, where it's the number one peanut butter brand. Skippy's built on that market success with their social media presence - their Facebook page has more than 655 thousand fans, and posts regularly get more than a thousand likes and 60 comments. Those are impressive engagement figures by any measure, and Skippy recently looked to extend their social media presence by making a more concerted effort on Twitter. I spoke to Mike Guanella, senior brand manager for Skippy Peanut Butter, to discuss Skippy's social media presence and the thinking behind their new Twitter handle, @TheFunNut.

Introduced via TVC, The Fun Nut is a new character that represents the ethos of the Skippy Peanut Butter brand. Tied in with the television campaign, Skippy partnered with Zócalo Group to launch a new Twitter handle, @TheFunNut, in October, the aim of which was to embody the simple fun of peanut butter and to share that fun online. And the new handle has been a success - Skippy's main Twitter profile, which has been active since 2009, currently has just under four thousand followers. @TheFunNut has 12.3 thousand followers, highlighting the engagement the campaign has achieved. "People have been ecstatic about @TheFunNut." Guanella said. "It's been taking people's days from 10 to 11. After surprising and delighting the Twitter community during the initial implementation period we've seen continuous engagement from fans asking for @TheFunNut to surprise them with a SKIPPY treat."

Engagement is the key element - of all the tweets sent from @TheFunNut account, a solid 79% of them have been replies, telling jokes, offering birthday wishes even congratulating people on life events such as marriage proposals or a new job. @TheFunNut carries an amazing sense of... well, fun. I asked Guanella about the engagement focus and how their team approached these interactions: "@TheFunNut aims to respond to as many tweets as he can - but to the right people of course. We set specific protocols to ensure the people @TheFunNut is responding to are in line the brand. Additionally, @TheFunNut has blitz days where he responds and surprises more fans than on a normal day, but these are never planned, you just have to follow along and wait for cues."

Scrolling through the many responses, you can't deny the sense of joy in all that @TheFunNut brings. And 12.3k followers can't be wrong. 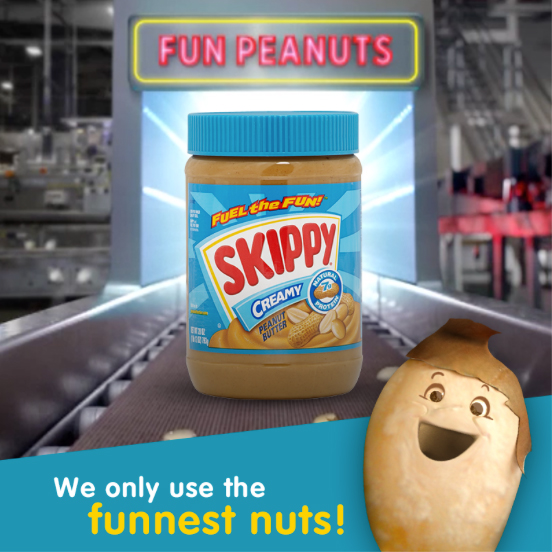 For Skippy, Facebook has long been it's primary social platform of choice. While they maintain presence on Twitter and Pinterest, Facebook's the platform that has driven the most traffic back to their website (53.1% share of social referrals) and has seen the most fan engagement. I asked Guanella about the decision to make a more significant push on Twitter, and in particular, whether Facebook's organic reach decline had anything to do with it. "We wanted to engage with a new community in an agile way, so Twitter was naturally the answer," he told me. "We've seen a lot of success on Facebook through the years, but for this program, specifically, Twitter was the right choice. @TheFunNut wouldn't have been able to comb the social community on Facebook like it did on Twitter to find those open conversations. And additionally, we wanted the content to be a mix of visual and straight status updates and we know that mix works better on Twitter. Lastly, we wanted to have a direct dialogue with followers and non-followers, interrupting conversations that didn't necessarily pertain to peanut butter, but fit within our voice and tone - again Twitter was our answer for that."

Utilising Twitter also enabled Skippy to capitalise on the hashtag #YIPPEE, which has been aligned to The Fun Nut campaign. "People we're already using the #YIPPEE we just needed them to tie it back to @TheFunNUT and Skippy Peanut Butter." The more engrained use of hashtags on Twitter has facilitated better use of the hashtag, maximising brand association and benefit.

Given the visual nature of the campaign, and the real-time response emphasis, the size of the team working on the main components is no real surprise, but it's great to get an overview and understanding of the inner workings of the campaign process. It's a question people always have, one that came up prominently in the wake of Oreo's 'Dunk in the Dark' tweet - it's great that they could get such a clever tweet out so quick, but how exactly did they do it? What sort of team do they have in place for such events? Having a group like this, working side by side in real-time, has clearly produced some great results for Skippy, with @TheFunNut's best tweets gaining well over 100 re-tweets, boosting impressions and brand awareness. 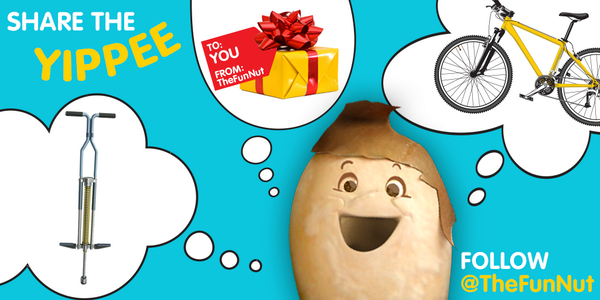 Wisdom of the Peanut

I asked Guanella how he felt about the campaign and the engagement they'd seen through @TheFunNut. "The engagement was very high and we gained more than 13k fans in just 30 days. That said, it's hard to compare the engagements versus Facebook, since they were very different interactions. Our engagements on Facebook are clearly from our most loyal fans, whereas Twitter engagements seemed to be from new fans or fans that didn't know we were on Twitter." Guanella told me. "Overall, it was a success because we gained a new audience and set a different voice from what we have on our other social channels, while still remaining on strategy."

This is a great point, one which may prove to be the greatest success of @TheFunNut campaign. While Skippy's main social media presence has been focussed around recipes and building the brand around that key element - establishing peanut butter as more than just a sandwich filling - through @TheFunNut, the team have been able to better enhance the fun aspect of the brand. The engagements and audience responses to @TheFunNut highlight the effectiveness of this strategy, of building around real engagement and using social as a means for establishing brand personality and purpose. Skippy's taken an intelligent approach to Twitter, recognising what the audience is using the platform for, then working to the strengths of the platform, rather than trying to push the same message through every network. The campaign also highlights how you can do this, how you can focus on specific audience subsets or elements of overall brand strategy, targeted at specific social platforms. It's taking note of how people use social, what they're actually doing on each platform, then tailoring the message to fit, rather than using networks as broadcast channels relative to demographic brackets. Building community is far more effective - interacting and responding, rather than post and hope.

Overall, a great campaign and some helpful insights provided by Guanella on how his team views and utilises social. There's much that marketers can take from the wisdom of that little peanut - and that's something I can honestly say I never imagined I'd write.