Facebook will now provide group admins with the capacity to mute selected group members for up to 28 days, expanding on the existing group muting options. 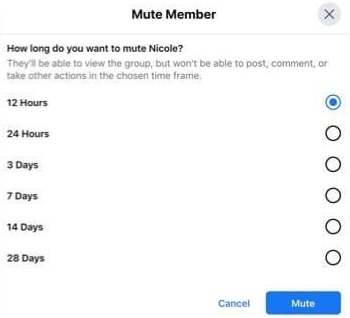 As you can see in this screenshot, posted by social media expert Matt Navarra, group admins will now have two new options for muting individual members - '14 days' and ' 28 days'.

Up till now, group admins have been able to mute selected members for up to a week at a time, but the new options expand that further, giving admins more control over how their groups are managed.

When group members are muted, they can still view content in your group, but they can't engage with such or post their own updates. The capacity to mute people for longer periods may help in giving members some space from the commenting back and forth in order to cool off, without having to kick them out entirely, while it also gives admins another option for punishment for those who break the rules, which could provide more control.

Facebook groups have become an important tool for connecting local communities amid the COVID-19 outbreak - though that's also lead to an increase in spam and conspiracy posts circulating through group discussions. Given the fast pace of high-engagement groups, it can be difficult for admins to manage such, but by providing more tools to penalize those who break the rules, it may better enable group admins to also play a part in reducing the spread of such posts.

Or it'll just help to stop that one member who can't let something go. Maybe, by putting him/her in an extended time-out of sorts, it'll help them re-think their approach.

The new muting options are being rolled out to all groups over the coming weeks.