Okay, maybe not such a big deal, everyone's already got a Facebook account anyway, right? Well not everyone, and it's that small percentage of people who don't that Facebook's aiming to scoop up with this update, along with those in regions where Facebook may not be as readily available, whether due to network limitations or government regulation. Facebook's experimented with Facebook-less Messenger sign-up before, but the project was shelved. The head of Messenger, David Marcus, told TechCrunch that that was a long time ago, when the Messenger project was in the middle of the road. Now it's a way to 'get to the last mile' and gather up all those users who've not yet signed on for a Facebook service. And in the ever-growing eco-system of Facebook, every new user counts.

From today, users in the US, Canada, Venezuela and Peru will be able to get access to Facebook Messenger by signing up using their full name and phone number. Users will be given the option to sign-in using their Facebook account on the welcome screen, but it won't be required. 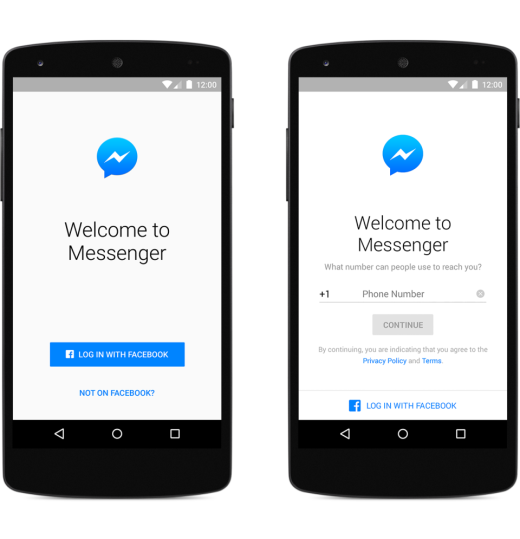 Those using Messenger independent of Facebook will still have the opportunity to build their own social graph - Messenger will allow users to upload their phone contacts then cross reference those against Messenger users who've registered their phone numbers - so rather than build links to your Facebook friends, you're linked only via the listings in your phone.

"With this update, more people can enjoy all the features that are available on Messenger - including photos, videos, group chats, voice and video calling, stickers and more."

The decision to enable Facebook-less access came after internal research showed that some people just don't want to sign-up to Facebook, for one reason or another, but that doesn't mean Facebook can't connect with them another way. And while they won't have access to the full functionality Facebook users do, Messenger-only users will get prompts to sign-up to The Social Network to access them via their Messenger account. It's a 'foot in the door' type strategy, a gateway drug, for lack of a better analogy. But even if they don't ever sign-up to Facebook proper, there are still ways Facebook will be able to monetize their ever-growing Messenger audience.

Last year, Facebook purchased messaging giant WhatsApp for $19 billion, a figure many thought was way too high for a messaging app, a communication process that is, essentially, out-dated. But WhatsApp has continued to grow, building to more than 800 million active users. The app recently hit one billion downloads on Android, putting it in elite company - only Facebook, Gmail, YouTube, Search and Maps have ever reached that figure. WhatsApp, too, has given Facebook access to a whole new range of potential users - 80% of WhatsApp users are from emerging markets, with a staggering 88% of the mobile market in Brazil and 81% in Argentina. 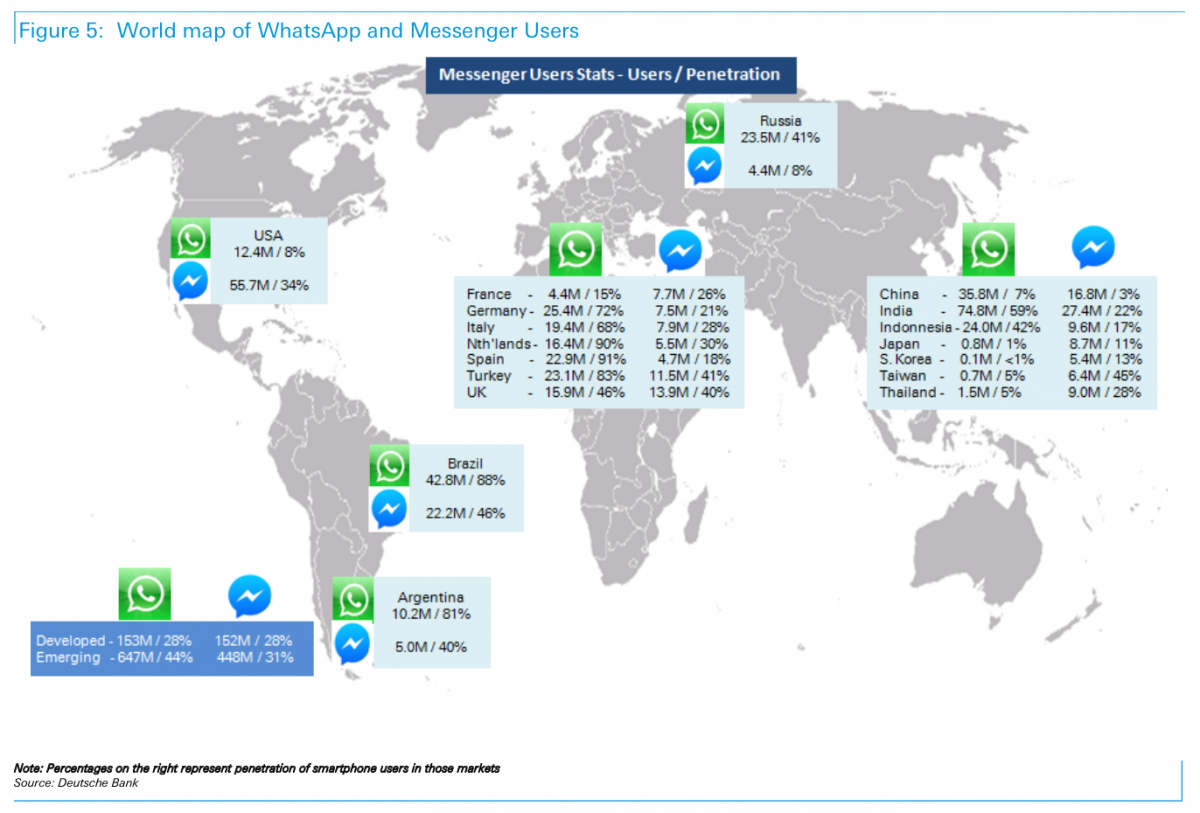 The added coverage significantly expands Facebook's reach, which, in essence, is what Facebook was paying for through this acquisition, and combined with Messenger's also advancing user-base, the combined audience of 1.5 billion messenger users, and growing, looks set to form a big part of Facebook's revenue streams moving forward.

Earlier this week, Deutsche Bank analysts predicted that by 2020, Facebook's messenger apps will be generating between $US9 and $US10 billion in revenue. That's a big jump from their current levels - at present, Messenger contributes almost no direct revenue, while WhatsApp makes $US49 million. Deutsche forecasts that within five years, messaging apps will contribute around 17% of Facebook's total ad revenues.

How? There are various ways Facebook could approach further monetization of their messenger audience.

At Facebook's F8 developer conference earlier this year, they announced a new platform for Messenger to enable third-party developers to build apps specifically for Messenger users. The addition of games and other Messenger platform features could lead to a significant revenue stream, but there's also the opportunity to implement in-app payment systems, similar to what China's WeChat does now, and taking a cut of any transactions made on the service.

But the main avenue for Facebook is likely to be advertising. Facebook has built their advertising platform over a long period of time, learning and improving along the way. If Facebook can utilize these learnings and develop strong native ad formats for mobile and messaging devices, they'll have access to a huge audience, and huge revenue opportunities. In the past, Facebook CEO Mark Zuckerberg has said that platforms become interesting for monetization at around one billion users. Both messaging apps are closing in on that number, and the company's ramping up efforts around both to prepare for that next stage.

Deutsche is predicting that by 2020, Facebook will be generating $3 in revenue per user, at 2 billion users. That's not unrealistic - currently, on average, Facebook users in the US and Canada bring in $8.32 per user. 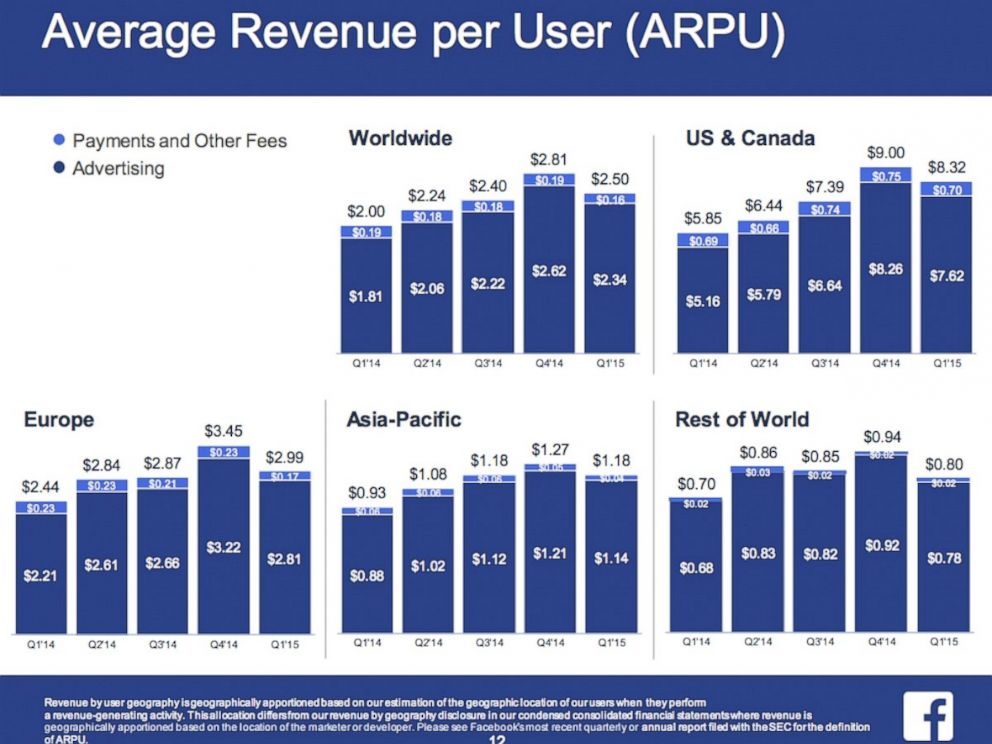 Given the predictions, it makes sense that Facebook's working to bring more users into the fold, providing them with every opportunity to do so. In the scheme of things, what may seem like a minor addition may actually pay off big-time in future.

Maybe it's time to start thinking about how messaging could be incorporated into your future marketing strategies.