At the core of Facebook's various data misuse troubles has been a concerning sense of naivety, or maybe a propensity to look at things in an overly positive light, without considering the potential negatives.

In that sense, it's somewhat concerning to see that this approach doesn't appear to be evolving, with The Social Network's latest feature being a new tool which will enable users to create their own petitions on Facebook, and rally other users in support. 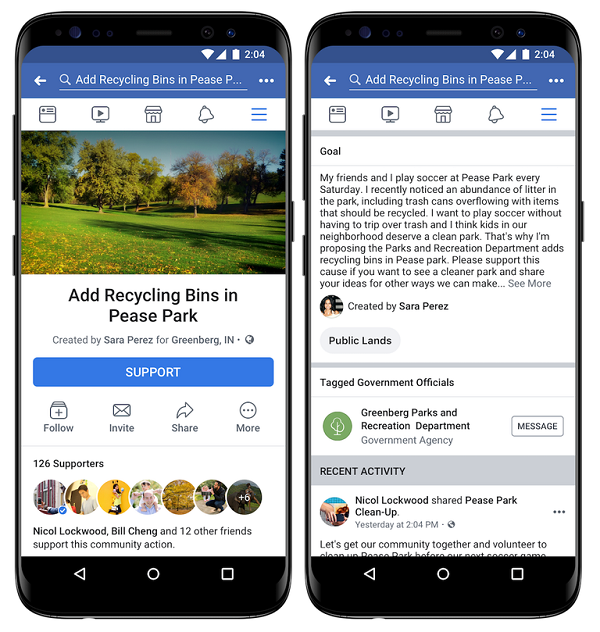 "Users can add a title, description, and image to their Community Action, and tag relevant government agencies and officials who’ll be notified. The goal is to make the Community Action go viral and get people to hit the “Support” button. Community Actions have their own discussion feed where people can leave comments, create fundraisers, and organize Facebook Events or Call Your Rep campaigns."

That all makes sense, and is in line with Facebook's broader efforts to be more helpful and useful within local groups, as opposed to a boiling pot of divisive global issues.

But as noted, it does seem to assume the best in people, and overlook the potential harms. It's easy to imagine such petitions being used to fuel hate groups, to spur community outrage on broader issues, and to pressure local politicians on subjects likely beyond their remit.

Or, as social media expert Matt Navarra points out:

Again, you can see what Facebook's going for, that it wants to play a more positive role in spurring participation. But this option does seem to come saddled with a lot of potential issues - so many, in fact, that it's hard to see why Facebook even went with it.

I mean, at best, it likely won't add much. Sure, it may provide another outlet for users to push for community action, but in order for anything to actually change as a result, the relevant powers that be need to listen. Will providing a forum on Facebook increase the probability of that happening? Maybe, I guess. Get a million people to sign-up to your cause and that'll get the right people listening. If, of course, they even have the power to act.

But I don't know, it seems fairly dangerous - it seems to add another tool for bad actors to abuse, at a time when Facebook is still working overtime to weed them out. Regardless, it's being rolled out in the US now, and will come to other regions soon. So if you have a cause you want to push, you now have a new outlet to do so.

Should go off without a hitch.