As we look ahead to a future of borderless commerce, and expanding global opportunity, translation tools could prove to be a key element. And this week, Google has taken a significant step towards eliminating the language gap, with a new real-time translation feature in Google Translate which can provide rolling text, in your native language, as another person speaks.

"Starting today, you can use the Google Translate Android app to transcribe foreign language speech as it’s happening. Transcribe will be rolling out in the next few days with support for any combination of the following eight languages: English, French, German, Hindi, Portuguese, Russian, Spanish and Thai."

The feature is only available on Android at this stage.

To try it out, open the Google Translate app on your Android device (ensure that it's the latest version), then tap on the “Transcribe” icon from the home screen. From there you can select the source and target languages from the dropdowns along the top of the screen. 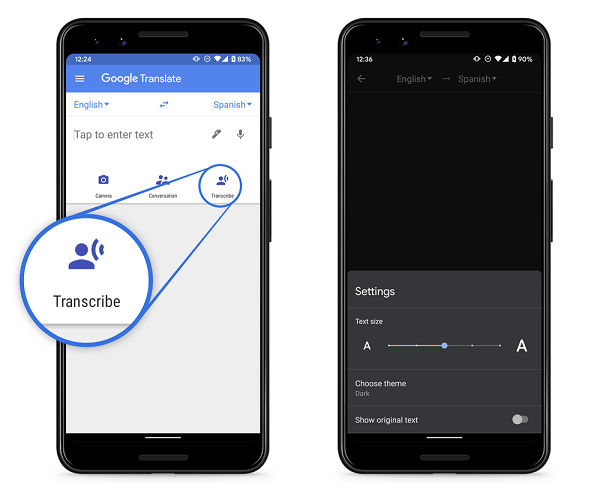 "You can pause or restart transcription by tapping on the mic icon. You also can see the original transcript, change the text size or choose a dark theme in the settings menu."

It's not perfect, and Google is constantly working to improve its translation tools. But it is accurate enough to be indicative in most cases.

Google does note that the feature works best in a quiet environment with one person speaking at a time - as is the case with most speech-to-text tools - so it's not at the point where it can function like a universal translator tool, like they have in sci-fi films, just yet. But it's getting there. And as noted, that could have significant implications for future transactions, with a particular focus on eCommerce dealings.

Facebook has been working for years on developing tools which can open up international commerce and exchange, with a view to maximizing its presence in different markets to facilitate more business dealings. Back in 2017, Facebook launched its 'Cross-Border Insights' tool, which enables businesses to explore alternative, international markets where they may be able to expand, while a key focus of Facebook's cryptocurrency project has been on facilitating funds transfer in different regions, with a view to building that into a broader eCommerce framework.

But even if Facebook is able to do this, the language gap will remain a challenge in maximizing small business reach and facilitating full, borderless exchange.

Translation tools will help, and with more people also now utilizing voice search, and getting more accustomed to speaking into their devices, it seems like a logical next stage for establishing global connection.

Again, it's not there yet, there are still improvements to be made and challenges to overcome. But this is a big step. And it could become an even more important one as small businesses eventually look to recover from the COVID-19 outbreak.