Earlier this month, Google rolled out a new display format for its desktop search result listings, which aimed to bring them more into line with mobile search display, and added prominent favicons and URL listings to each result. 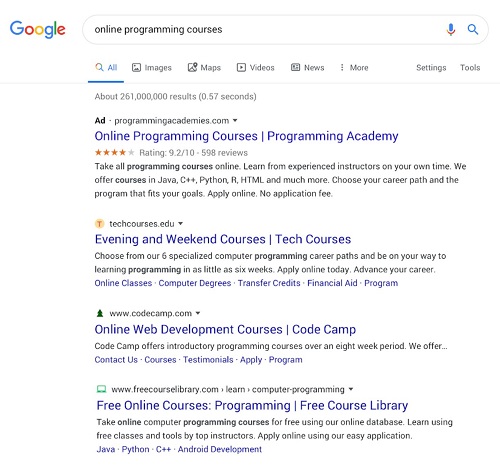 But the change has seen significant criticism, with some suggesting that the format makes it much harder for users to distinguish between paid ads and actual, earned results.

I would argue there is now no visual distinction between ads and results. There is still, technically, *labelling*, but it's hard to escape the conclusion that it is supposed to be difficult to spot at a glance where the adverts end. pic.twitter.com/qjUmisbLER

The criticism, when viewing examples like the above, seems valid, and research has already suggested that the updated desktop format is leading to more people clicking on ads, supporting this theory.

As reported by Digiday, various ad tech providers have noted changes in desktop ad click-through rates following the update, with CTRs for search ads increasing between 4% and 10.5%. That's clearly beneficial for Google's ad business, but it could also diminish trust in the company's core search product - if people can no longer tell what's a reputable business, as opposed to one with the deepest pockets, questions around search, and Google's motivations, could eventually have adverse consequences for the company.

And now, Google has taken note, announcing on Twitter that it will review its updated format.

"Last week we updated the look of Search on desktop to mirror what’s been on mobile for months. We’ve heard your feedback about the update. We always want to make Search better, so we’re going to experiment with new placements for favicons. Our experimenting will begin today. Over the coming weeks, while we test, some might not see favicons while some might see them in different placements as we look to bring a modern look to desktop."

Here’s our full statement on why we’re going to experiment further. Our early tests of the design for desktop were positive. But we appreciate the feedback, the trust people place in Google, and we’re dedicating to improving the experience. pic.twitter.com/gy9PwcLqHj

The two statements here seem almost contradictory - on one hand, Google acknowledges the noted, and significant, concerns that have been raised, while on the other, it says that early feedback has been positive.

Whether it will lead to Google rolling back the change, we'll have to wait and see, but definitely there's a case to be made that Google is intentionally diluting the separation between paid and organic results over time, and confusing users in the process.

In fact, this is only the latest in a long history of Google's gradual merging of the two elements. Illustrating this, the team from Search Engine Land recently updated their infographic, which illustrates the changes over time.

When you see it laid out like this, it's difficult to argue against the idea that Google is deliberately seeking to reduce the distinction between the two elements. Which, for Google's ad business, makes sense, but as noted, if consumers lose trust in the transparency of Google's results, that could lead to further consequences, and potentially, reduced usage.

But then again, it probably won't. As you can see here, as Google has made similar changes over time, it hasn't lost out in terms of search traffic, and while this latest change seems more significant, if Google sticks to its guns, it will likely be fine. But then, of course, there could be further regulatory questions around such, and Google could come under scrutiny over misleading results. There are clear, and pressing, reasons why Google would want to revise its approach, but whether that results in a roll-back remains to be seen.

For businesses, if Google does remove favicons from desktop search, that somewhat lessens the emphasis on them - but still, if you don't have a favicon attached to your website, it's worth updating your info.

You can read more about how to add a favicon to your web identity here.