TikTok Shares New Insights into Why People Use the App, and How it Celebrates Authenticity

Can you quantify authenticity and joy, and how, exactly, would you measure that, in terms of a social network?

That’s what TikTok has sought to determine with its latest study, partnering with Nielsen to glean more insight into how TikTok makes users feel, and what truly differentiates the app from the competition.

Nielsen conducted interviews with over 8,000 TikTok users from around the world to get their thoughts on various aspects of the in-app experience, including their perception of TikTok content, and ads, which showcases some key trends that have likely helped to propel the platform’s massive growth.

“Nielsen’s study shows users around the globe find TikTok content to be authentic, genuine, unfiltered and trendsetting. At the same time, when looking specifically at advertising content, users still associated terms such as authentic and genuine, while adding honest, real, unique and fun.”

Which is interesting, and likely reflects the unique nature of TikTok ad campaigns, which, in general, seek to align with organic content approaches to avoid users skipping past.

But the overall findings do underline the joy of the app, and general positivity, which, especially given recent reports, may not be as present in other apps.

Among the key findings:

“Globally, an average of 53% of TikTok users say they trust others to be their real selves on TikTok.”

That’s almost a direct contrast to more recent revelations about Instagram, which some studies have shown can have a negative impact on self-perception due to perceived pressure for perfection and popularity. Maybe, then, TikTok provides an antidote of sorts in this respect, putting more focus on the lighter side of life, as opposed to portraying an unrealistic image of yourself.

Further to this, the study also found that:

“Globally, an average of 31% of TikTok users included “lifting my spirits” as one of the top three reasons for returning to the TikTok platform again and again.”

The short-form video approach lends itself to more light-hearted, comedic takes, as opposed to aspirational depictions, and that realness, at least based on these findings, may actually make it a more welcoming, open environment for connection, and positivity, which we could all use more of amid the ongoing pandemic

“Globally, an average of 59% of TikTok users feel a sense of community when they are on TikTok, while  77% of TikTok users say TikTok is a place where people can express themselves openly.” 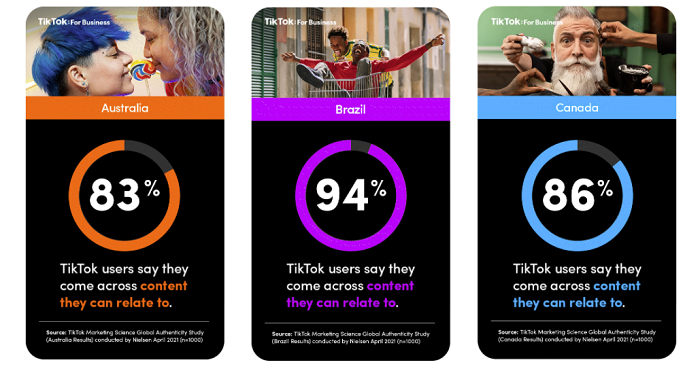 That does feel like the broader ethos of the app, in that the more realistic perspectives and windows into people’s lives celebrate the commonalities that we can all relate to, as opposed to users trying to set themselves apart by being ‘better’ or better looking than their contemporaries. TikTok clips invite participation, and celebrate commonalities, both of which play a key role in its appeal, and could be an antidote, in some ways, to what social platforms in general have become, with respect to their performative, often selfish, depictions.

“Globally, an average of 77% of TikTok users say they read the comments on the posts and videos on TikTok.”

There are some interesting notes here, which do underline some of the key appeal points of the app, and point to why TikTok has been able to gain such traction in the space. Maybe, over time, social media has become more of a contest, more of a space to compete and show off your highlights, which, in turn, has made it less welcoming, especially for people who are simply looking to connect.

Maybe that’s why TikTok has such appeal, because it showcases more of the things that connect us, as opposed to people trying to set themselves apart.

It’s an interesting consideration – you can check out TikTok’s full study report with more insights here.