Social media platform rules have become a key area of focus of late. YouTube announced a range of rule updates this week, and Facebook has been working to change its terms of service to avoid data misuse.

And now, Twitter is also updating its rules documentation, in order to ensure that its regulations are easy to understand, and cater to all platform user groups.

"Our rules exist to help keep everyone using Twitter safe, and ensure that they can participate freely in the public conversation. Over time, we’ve added new rules and updated existing ones, but these changes eventually made our rules confusing and difficult to understand. So today, we’re refreshing our rules with simple, clear language, and reorganizing them into high-level categories: safety, privacy and authenticity. We’ve also added detail around other policies, including election integrity, platform manipulation and spam."

Twitter has essentially culled its overarching rules document down from 2,500 words, to 600, with each element now clearly describing exactly what will not be allowed on the platform. 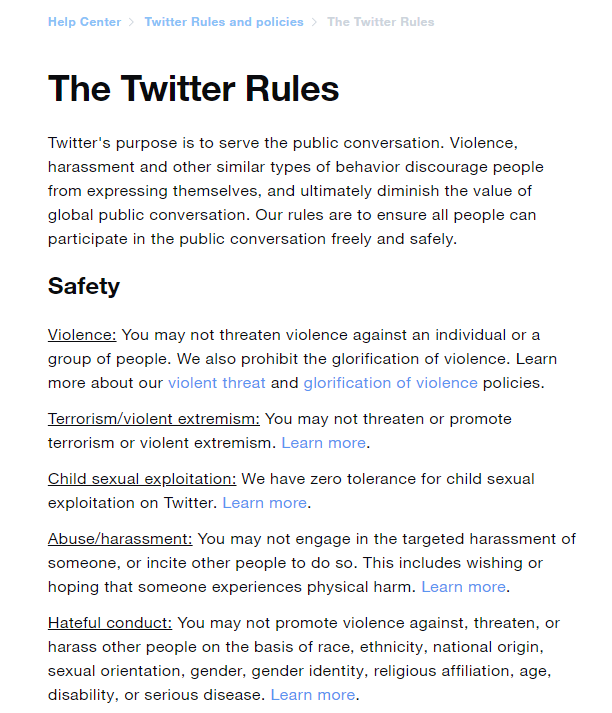 Twitter also says that it's refreshing its specific rule pages to include more information, with clearer examples, step-by-step instructions on how to report violations, and details on what happens when Twitter takes action.

As you can see above, each rule has links to additional resource pages - you can learn more about some of the specifics at these updated links:

The first stage in ensuring user safety is clarifying what the actual platform rules are, and seeking to make them easy to understand, while also having them cater to as many instances as possible. When you're dealing with user counts in the hundreds of millions, that gets even more complex, but it's good to see Twitter working to clarify its stance on each element, and helping users understand their obligations, and limitations, in use.