This is interesting. Twitter has today launched a new campaign in support of local journalists as part of World Press Freedom Day, which includes full-page ads in various newspapers promoting Twitter lists of journalists to follow, as well as new education programs and funding to support open press coverage.

"As journalists continue to selflessly report from the front lines of conflicts, in the face of hostile interests, and, especially during this past year, risk their personal health to cover a global pandemic, we believe it is pivotal that they and their industry are supported."

Which is particularly interesting right now, as Twitter continues to grapple with Indian Government requests for restrictions on anti-Government sentiment, along with other regimes that are pushing for more control over social media platforms, and what's published by their citizens.

Twitter, in many cases, has been forced to comply with such rulings - so while the platform may be pushing for press freedom, there's a fairly strong conflict within this approach.

Either way, Twitter's looking to, at least outwardly, advocate for press freedom.

The main element, as noted, is a new, full-page ad campaign,  which isrunning in 28 local newspapers across the United States, to promote its #FollowLocalJournalists initiative. 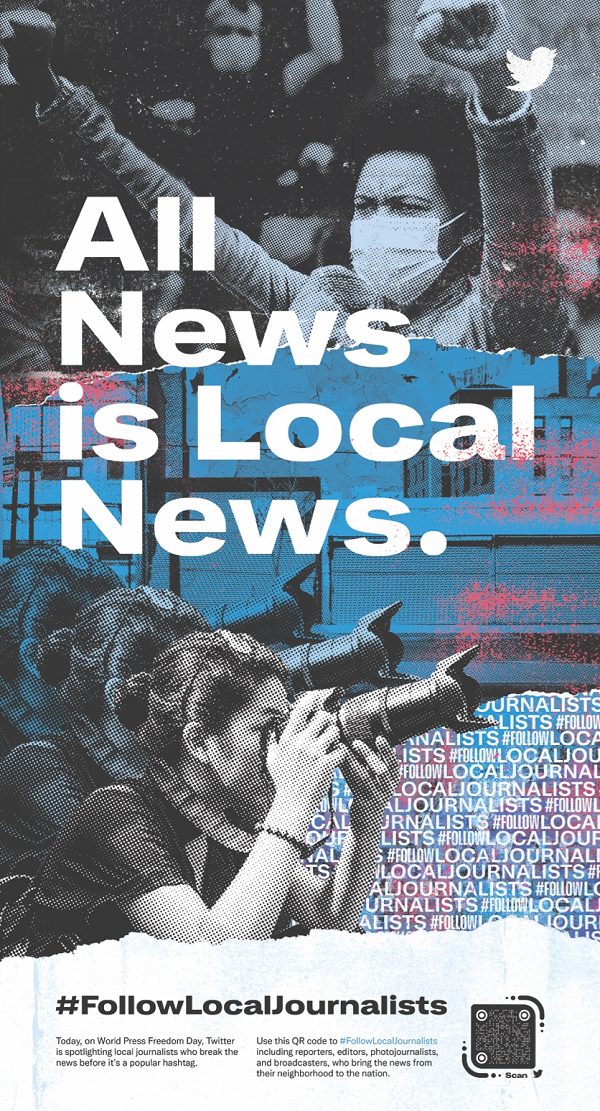 As you can see here, the ads direct people to scan in the QR code at the bottom, which links through to Twitter Lists of local journalists, created by each newspaper and by Twitter's team. That provides people with a more direct way to stay in touch with the latest news coverage from these correspondents, with Twitter's real-time nature providing a more timely way to stay on top of the latest news and announcements.

Which is a great use of Twitter - but again, there is a question over Twitter's capacity to stand up for press freedom outside the US, which is regularly being challenged - likely even more so now in the wake of the Trump Presidency.

The view is that former President Trump's use of Twitter highlighted just how influential Twitter can be, which has since seen many other world leaders looking to influence, and even control tweets, as part of their efforts to maintain power and control within their respective regions.

Some of those censorship requests make sense. In India, for example, in various cases, the Indian Government has sought to limit misinformation around COVID-19. But in many other cases, the Government has also sought to eliminate criticism of its handling of the pandemic, which has included the removal of tweets from local journalists, and suspension of their accounts.

Twitter says that it has removed these tweets in compliance with local laws, which indeed provide the Indian Government with the capacity to effectively implement censorship. While in Turkey, Twitter has been forced to comply with Turkish officials with respect to controlling speech via tweets, with local Twitter representatives appointed to enact new content removal laws.

So while Twitter is promoting one thing, in the US specifically, there are parameters around its capacity to support press freedom in different regions.

Which leads into the next element of the new campaign - in addition to its newspaper ads, Twitter is also running a global campaign to #FollowLocalJournalists.

"We’re encouraging everyone - national reporters, journalism advocacy organizations, and everyday passionate news consumers - to share impactful examples of local journalism and elevate the reporters who contributed to it. The goal is to spotlight these reporters’ work and increase their audience."

So long as they're not, you know, banned by Twitter via Government decree.​

Twitter has also organized Twitter Spaces events around the world, where users will be able to hear directly from journalists about the issues facing their industry, including events in the Philippines, Myanmar, India, Japan and Brazil.

And finally, Twitter will also provide training and 'Ads for Good' grants to various non-profit organizations that provide support for journalists around the world.

Overall, it's good to see Twitter looking to amplify journalists directly - and that initiative, in some ways, also aligns with the platform's new push into newsletters, and facilitating more direct connection between journalists and their audience, which could also help to support ongoing press freedom.

But as noted, there are also conflicts within this.

It's one thing to advocate for freedom of the press, and another to match that against the company's business interests, and the need to comply with local restrictions around such, in order to meet stated requirements.

Given this, it's a promotion which sits a little uneasy, and feels a little more PR-like than Twitter would have intended.