It’s been in testing for a while, and today, Twitter has finally launched its new ‘Notes’ option on selected user profiles, which provides a simple, integrated way to attach longer text elements to your tweets.

We’re testing a way to write longer on Twitter. pic.twitter.com/SnrS4Q6toX

As you can see in this example, the Notes UI is fairly basic, with all the regular elements of a blog post composer, including the capacity to include header images, to insert images and links within the text, and a streamlined option to add in tweets.

Once published, Notes will appear as a Twitter card, linking users through to the full post – here’s an example shared by Matt Navarra: 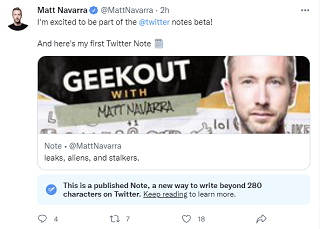 Tap through and you’re taken to the full text: 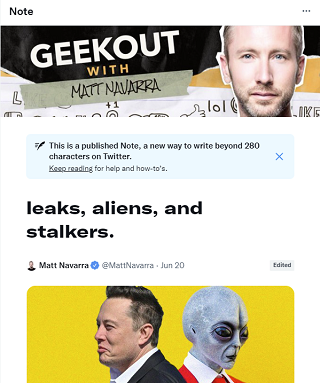 Note titles are limited to 100 characters, and the body of a Note can be up to 2,500 words, giving you a heap more room for your longer-form content in the app.

And unlike tweets, Note writers will be able to edit their notes after they’ve been published, with an ‘Edited’ label added to the top of the Note.

Which seems so simple – an ‘edited’ label. Imagine that on actual tweets.

Finally, notes will also have unique URLs which people can navigate to from outside of the Twitter platform, ‘whether or not they are logged in to Twitter, and even if they do not have a Twitter account’. That will facilitate broader sharing activity, and could make it a more valuable long-form option.

Twitter’s been trying to integrate its own blogging-type platform for years, in order to cater to users who end up tweeting either long tweet threads or adding screenshots of text to their tweets.

Indeed, back in 2016, when then Twitter CEO Jack Dorsey explained that that company was looking at potential options to enable longer posts within tweets (which eventually resulted in the expansion of tweet length to 280 characters) he used a screenshot of text to communicate his logic.

Notes will expand upon the same – but it remains to be seen whether users really want, or need to post longer form content of this type direct to Twitter itself, or whether they’re better off re-directing users to their own websites and WordPress blogs, where they can gather visitor data, serve ads and more, within an element that they control.

I mean, clearly there is some need for longer content options on Twitter, at times - but will writers really want to be publishing direct to Twitter, given most have likely already established their audiences via other tools?

Apple’s ATT update has also prompted more people to consider first-party data, and the value of building direct connection, independent of social platforms and digital providers, and in this sense, Twitter Notes does seem a little outdated or ill-timed.

But still, it could provide new promotional opportunities - and it’ll also be interesting to see if Twitter users themselves are keen to read longer form, native tweet blog posts, which will be the real story in the end.

Right now, however, Twitter says that Notes won’t see an algorithmic boost, and won’t get any sort of priority over regular tweets. So the value doesn’t seem to be huge, but hopefully, Twitter will share usage data soon.

Twitter’s Notes option will be made available to a selected group of writers, as chosen by Twitter, to begin with.