Twitter’s working on a new bookmark feature which will help users keep track of tweets they want to come back to, without having to ‘Like’ them to keep tabs. 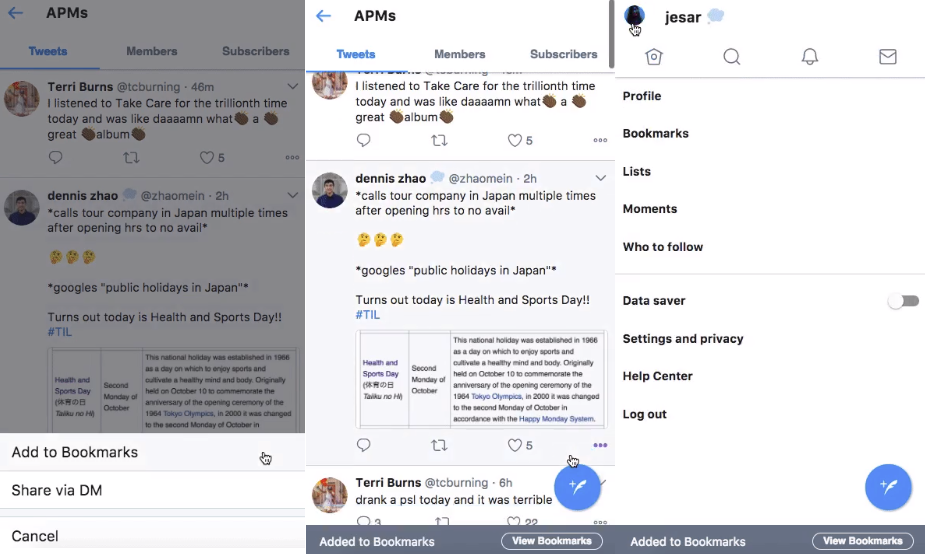 The above sequence is from a demonstration shared by Twitter product manager Jesar Shah, who noted that they decided to develop the option after a recent hackathon.

Hi Twitter! Many of you (especially in Japan!) have said you’d like to be able to easily + privately save Tweets for later. Right now, people bookmark Tweets by liking, DM-ing to themselves, or Retweeting. But this could be easier. https://t.co/iQ9W9mB1uV

Users have been calling for a save option for some time – right now, as noted, you can Like a tweet in order to mark it for later reading, but that process is not ideal.

For one, it likely messes with Twitter’s feed algorithm – the system takes your actions into account when assessing what else to show you, so the things you Like will definitely have an impact on what you’re going to see more of, and the accounts Twitter recommends you follow. You might Like something, but not actually ‘like’ it, maybe you just wanted to read the article later. Having a dedicated option for this purpose would improve Twitter’s data flow in this regard, and help improve their algorithm matching.

The other problem with using Likes as a tracking option is that it confuses your stream – in order to go back and find that article you wanted to read, you have to wade through all your other likes from that day, which can be problematic, relative to how you use Twitter.

It may seem like a relatively minor addition, but it’s worth noting that Facebook’s save option is used by more than 250 million people every month, so there's definitely demand for such a tool.

This comes on the back of Twitter’s larger experiment with 280 characters, which may indicate that they’re looking to push out some new tests like these in order to boost usage. Twitter’s monthly active user count was flat in their last report, and their Q3 results are due later this month. The activity on these updates might suggest that their Q3 numbers won’t show much change as yet, but with new initiatives in place, they may have something to point to for future development, and ease at least some investor concerns.

Or this is just part of the slow-moving Twitter wheel of change. It may not add a heap to the Twitter process, but the benefits are likely worth the effort.