Twitter's Chronological Timeline is Back, Which Provides a Range of Potential Benefits

The World: An edit button

There are some people that are actually not interested in an edit button for Twitter - there’s the chance it could lead to many problems with people liking and retweeting tweets which, given the brevity of tweets, could easily be changed, making users look like they’re advocating for something that they may have no interest in being a proponent of.

However, there are those of us who always hit the “Most recent” button on Facebook, and very much welcome a chronological feed option for Twitter. This feature was first tested in November - Twitter began testing the option to make it easier for users to see the latest tweets on their feed first, rather than what was pushed into their feed based on the company’s algorithm. Now, it has been rolled out to all users. 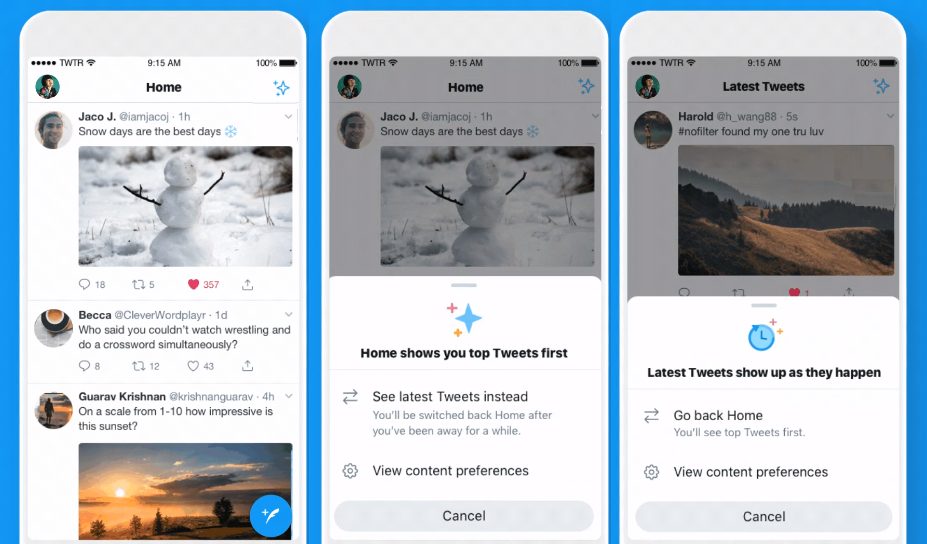 As shown in the screenshots above, you'll now see a little sparkle icon that above your home timeline. Tap on it, and you have the option to switch to a feed of chronological tweets. The toggle is currently only available on iOS, though Android users will also soon see the same.

With Twitter being a leader in real-time and breaking news, I think this change is one of the few the social platform has made that's actually helpful. It’s now easier to jump into conversations as they're happening, something that many social media platforms are looking to prioritize. It’s also gold for those of us who live on Twitter during sports matches, and for breaking news events it’s ideal.

When you want to learn about something that's happening in real-time, you want to read tweets as they’re tweeted. That said, if you actually prefer the default “Best tweets first” timeline, no worries - you can toggle between that feed and a real-time feed quickly and easily. Once you tap on the sparkle icon, you have two options: “See latest Tweets instead” or “go back home.” If you choose “go back home,” you'll see the tweets that the algorithm thinks you’ll be most interested in. Wouldn’t it be best if you could decide what you want to see yourself? Isn’t it frustrating when you’re on Instagram or Facebook and see posts that are already several days old, but appear to be new? I know I’d rather know what was happening as it happens, and not miss things that might be important.

Twitter has always served as the social media platform with the most ideas being exchanged, the easiest place to begin and deepen conversations and relationships. Now, with the chronological timeline back, you're able to see ideas that you find the worthiest, as opposed to something an algorithm thinks you’re into.

This definitely comes in handy for social listening too - you can easily see who's talking about your industry, and where you might be able to add to the conversation and help someone out. The more you can do this from a brand’s handle, the more likely people are to then begin to look to you as a key resource, and it’s far better to respond as a question is asked, rather than using the algorithmic timeline and replying to days old tweets.

Additionally, Twitter also now gives you an option to provide feedback on every tweet you see (in the algorithmic timeline). Prior to mid-December, you could only give feedback on tweets that Twitter arbitrarily inserted into your timeline from people you don’t follow. Now, for every tweet you see, you have a dropdown option to say “Show Less Often.” From there, just like when you click off an ad on Instagram, you have the chance to give feedback like “Show fewer tweets from this person,” or “This isn’t relevant to me.” In this case, you’re actually able to teach the algorithm what is relevant to you. Analytics on which users said “Show fewer tweets from this person” will also give you great insight into who your ads are actually resonating with, within your target.

The more control users are able to have over their feeds, the better, and while, at least for now, you have to make this chronological choice every time you log in, you do have the option.