Why is it So Easy to Chase Bad Strategy Online? 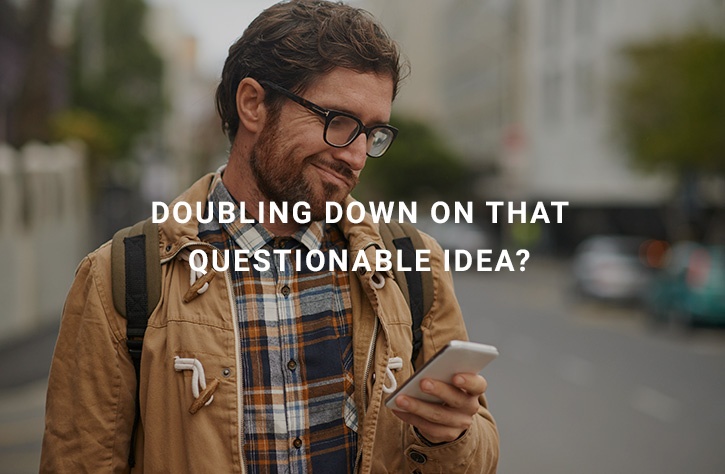 Stop me when this sounds familiar: one of your colleagues or clients comes up with an idea that sounds mildly intriguing. But, the plan they put together is based on assumptions, the offer they're making isn't compelling to customers, or the whole thing just seems destined to go nowhere.

From your vantage point, it's obvious the idea isn't ever going to bear fruit. And yet, they continue to pour more and more time, effort, and resources into the project.

What do you do?

We come across this phenomenon all the time. Very often, business owners and executives seek us out after they've spent many months, and tens of thousands of dollars, on website design or online marketing strategies. Usually they've gotten very little in return.

Despite those measurable setbacks, though, they stay committed to the core strategy that has been put in place. In essence, they throw good time and money after bad, compounding their losses one step at a time.

It turns out there is a scientifically valid reason this occurs - psychologists call it effort 'justification bias', and it essentially boils down to the simple concept that the more we've put into something, the more value we tend to think it has.

To put it another way, it's harder to give up on a thought or concept after you're personally invested in it. Spend a couple of decades in a certain career and it doesn't matter if the prospects for continued employment seems slim; you'll still be tempted to hold on to your path to success.

And of course, the more money and creative energy you spend building an online strategy, the more convinced you become that it represents the right approach.

It's no sin to make a bad decision in life or business. But, when we become so stubborn that we won't reverse course, that can create big personal and professional problems. So, how can you overcome effort justification bias, which affects all of us universally? Here are a few pieces of advice I think can be helpful...

1. Know When to Cut Your Campaign Losses

Most people, if they are being honest, will admit it's difficult to know when to give up on anything - after all, when you believe in an idea strongly enough to act on it, you're probably going to keep believing in it and feel like success is just around the corner, even if it isn't.

Sometimes, you can alter your approach to a challenge or campaign strategy and have things come out all right. But, if you suspect that you're only hanging on to a philosophy because you've already tried to make it work (or worse, defended it to friends or employees), then give yourself permission to change things up.

It might be hard on your pride, but you'll feel better once it's done. Plus, admitting a mistake - to yourself or others - is a good first step towards moving in a new direction.

2. Look for an Easier Way to Meet Your Marketing Goals

Not everything has to be a huge chore. From time-to-time, we work with clients who avoid taking shortcuts of any kind because they worry that it'll diminish the value of their work, or the finished product. That's not a bad way to think, but it can leave you trapped in doing menial tasks for no reason.

Another way to say this is that you don't necessarily have to do things the hardest possible way, even if that's how they were done before. It's okay to embrace a new app, a trained vendor, or a customized template in certain situations.

One way we justify past efforts is by repeating certain actions. I'm not advising you to become lax or sloppy as a marketer, just to avoid holding onto difficult ways of doing things just for the sake of it.

3. Get a Fresh Perspective from Peers

Perhaps the easiest way to fight effort justification bias is to seek expert advice from time-to-time. If you're working harder than ever, or spending more money than you think you should, then compare notes with professionals to see whether what you're doing is worth continuing.

It's often easier to spot wasted time and resources from a third-party perspective than it is when you're working on something yourself - after all, the other person hasn't put so much into a given idea or approach.

Someone who has a little bit of knowledge about what you're trying to accomplish might be able to tell pretty quickly if you need to reverse course and abandon your strategy.

It's hard to admit to yourself that you're following a road that isn't ever going to lead anywhere, however if you can't admit a mistake when you really need to move on, then things are only going to get worse.

Effort justification bias makes us all more likely to double down on bad decisions than we are to correct them, even when the remedy to a situation seems fairly obvious. As a marketer and a business person, it's up to you to know that and refuse to chase failing ideas instead of embracing better ones.

Take some advice from someone that's been there. Confirm your personas and be sure you meet their needs with your campaigns.

This post was originally published on the KAYAK Online marketing blog.