It's taken a little longer than expected, but YouTube has today announced that it's launching its TikTok-like 'Shorts' option to users in India this week.

This week in India we’re launching an early beta of YouTube Shorts, a new way to discover, watch and create short, vertical videos on the YouTube app.

Even if you don't live in India, you can still upload your short videos today. Learn more → https://t.co/6VySxIwMB9 pic.twitter.com/M0jXHoJkki

"Over the next few days in India, we’re launching an early beta of Shorts with a handful of new creation tools to test this out. This is an early version of the product, but we're releasing it now to bring you - our global community of users, creators and artists - on our journey with us as we build and improve Shorts. We’ll continue to add more features and expand to more countries in the coming month" 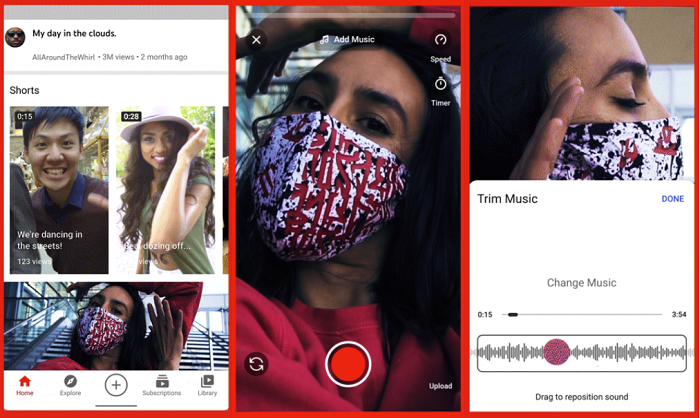 As you can see in the first shot above, along with Shorts, YouTube's also adding a new, prominent 'Create' button on the front page of the YouTube app (the plus icon in the middle of the bottom bar). The team from Android Police spotted this in testing earlier in the month, and now YouTube has confirmed that the new icon is coming to both Android and iOS as the roll-out of Shorts is expanded.

Some YouTube users have already been critical of the design addition, but ensuring Shorts is prominent is likely the only way that it's going to have any real impact, and enable YouTube to fill the gap left by TikTok in the Indian market as a first step.

Which is pretty much what most analysts expected. Back in June, when the Indian Government first announced its ban on Chinese apps, including TikTok, it seemed only logical that YouTube would look to fast-track the development of its Shorts tool in order to fill the gap in the Indian market.

At that stage, there had already been various reports of YouTube's coming TikTok clone. The Information first reported that YouTube was working on Shorts back in April, with testing then expanded in June, just ahead of India's TikTok ban.

YouTube and TikTok had been the leading video apps in the Indian market, which had actually evolved into a public battle between India's top TikTok and YouTube stars earlier in the year. TikTok, reportedly, had around 200 million Indian users at the time of its banning, while YouTube sees more than 265 million active users in the region.

It seemed to make sense, then, that with TikTok gone, YouTube would look to gather up those orphaned influencers via Shorts - but instead, it was Instagram that jumped at the opportunity. A week after the Indian Government's ban on TikTok, Instagram launched its 'Reels' functionality in India.

For context, Instagram sees around 100 million Indian users, so its presence is not as prominent, it's not as significant a player in the market.

Or at least, it wasn't. Last week, Instagram added a new, dedicated 'Reels' tab for users in India, in response to the rising interest in the function. Instagram didn't provide official numbers, but it seems that Instagram has started to fill the TikTok void for at least some Indian users.

Which is why it's a little strange that it's taken YouTube so long to launch Shorts in the market, enabling Instagram to gain some momentum. You would expect, given the user counts, that YouTube's version will still prove popular, but by giving Instagram a chance to showcase Reels, it could have also lost an opportunity.

Now it just comes down to which one users feel more aligned to - and likely, which gives them the best chance at maximum exposure.

That's a key focus for Shorts - as explained by YouTube:

"Every month, 2 billion viewers come to YouTube to laugh, learn and connect. Creators have built entire businesses on YouTube, and we want to enable the next generation of mobile creators to also grow a community on YouTube with Shorts."

No other platform can match that reach - and again, YouTube is much bigger in the Indian market than Instagram. And with Oracle striking some form of deal for TikTok's US operations in isolation (as opposed to a US company buying the whole app), it doesn't seem like TikTok will be coming back to India any time soon.

So Shorts could be the best option, and could still gain momentum quickly. Depending on how people warm to it, or don't.

We'll have to wait and see how prominent those tools are, but again, the reach, prominence and exposure of Shorts content will be key to maximizing attention - just as it is on Instagram.

And while the function is only being launched in India, YouTube is encouraging all creators to start publishing short-form videos with a view to a broader Shorts launch in the near future.

Will it work? Will it limit the growth of TikTok? Can YouTube and Instagram viably tap into the popularity of the form in order to keep users from drifting to rival apps?

Even with a new deal in place for the US operations of TikTok, there's still a lot of uncertainty around the app, and YouTube and Instagram have more mature, established monetization models. Neither option might be as good as TikTok, exactly, but they might both be good enough, and if top creators can make more money on the bigger apps, that could still spell the end of TikTok, despite its ongoing popularity.

This could be the next stage in that shift.