At last year's Twitter Flight developer conference, CEO Jack Dorsey, as part of a wider effort to mend bridges with the developer community, called for ideas for updates to the service. The fourth most requested feature was providing the ability to add alternative text for images, enabling better functionality for people who are visually impaired. Twitter's now actioned that request - from today, people using both the iOS and Android versions of the Twitter app will be able to add descriptions of up to 420 characters to images within Tweets. 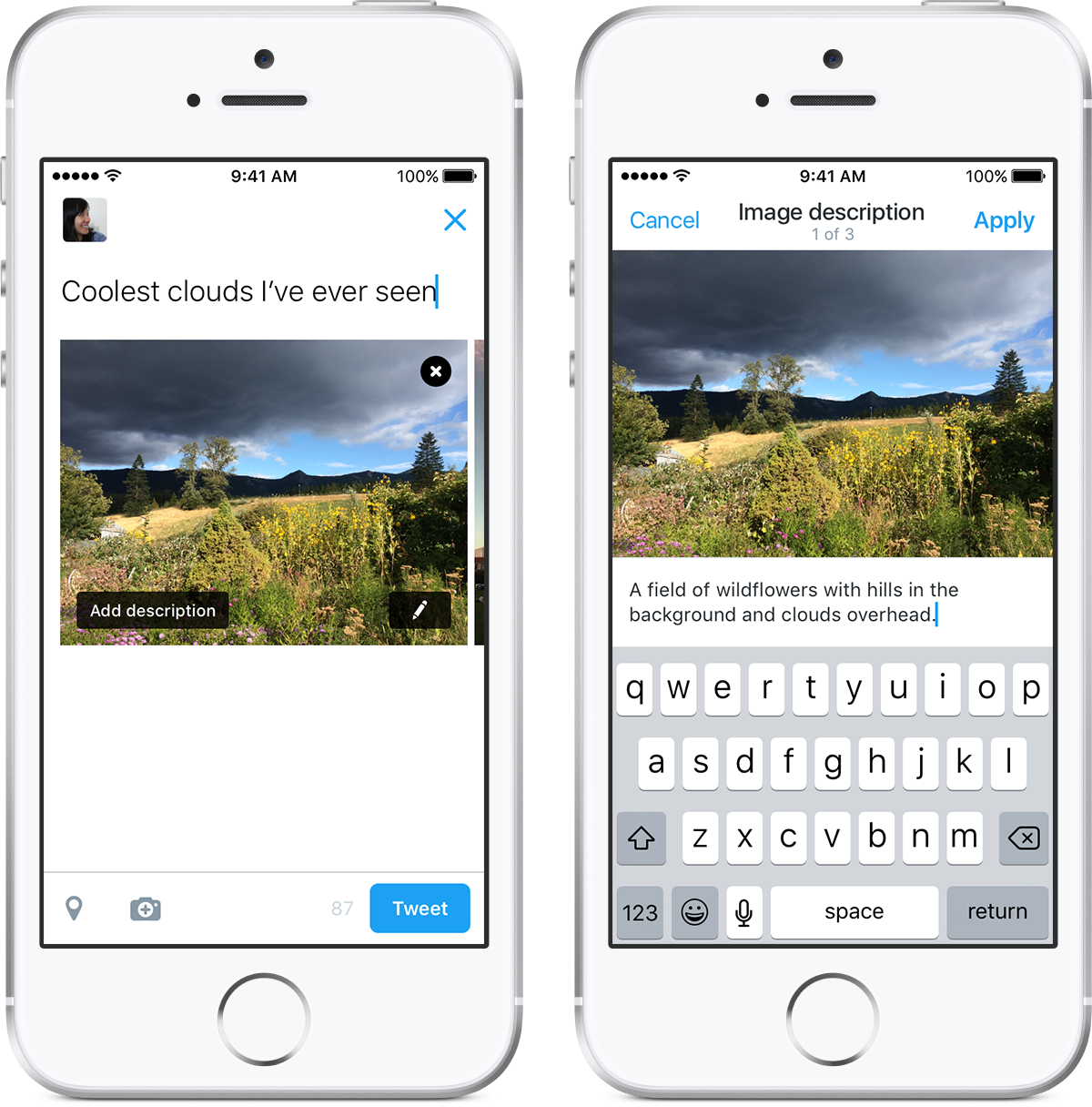 The addition of text descriptions will improve the user experience for those who are currently not able to view full tweets. Automated screen readers and Braille devices are able to translate text, but images, of course, prove problematic, denying visually impaired users full access to the platform's content. With text captions, such devices can now work in greater collaboration with tweets, providing a more comprehensive - and inclusive - on-platform experience. Already, The New York Times, The Associated Press, The BBC, and Sky News have started using the new option to better connect with their audiences.

Twitter's using web-standard alt-text coding to add in the new feature, while they're also updating their REST API and Twitter Cards services, enabling access to the same, which effectively opens up the new option to publishers and developers. This is particularly interesting as it may lead to a new data source with uses beyond assisting the visually impaired alone. Alt-text data is one of the many elements used by Google, for example, to better match relevant content to user requests. As such, description text could provide new insights and data for tweets - and at 420 characters, it takes the potential for tweet embedded info well beyond the standard 140-characters available.

As noted by VentureBeat:

"In addition to the accessibility gains, another potential benefit of including alt text in images is that it should make it easier for search engines to identify specific tweets. Image content is one of the things that Google, Yahoo, and Bing may look at in searches, and the addition of this feature could help with that. This could be useful not only with external search engines, but within Twitter's search field as well, or through API partners."

In essence, Twitter's providing developers a new data tool to play with, and if enough publishers get on board and start including text descriptions within their tweet images, it could become an interesting and beneficial source. Imagine being able to search tweets by image content, being able to get data on what images and image types are more popular and where, on what different types of words are being used to describe similar objects in different regions. Businesses could also set up alerts to let them know when people use images of their brand representatives, products or logos - there's a range of ways beyond the initial use-case in which image descriptions could be of value.

Twitter's updated its support documentation to include a full rundown of how to enable image descriptions in your tweets - the functionality's currently only available via iOS and Android, you can't add descriptions via desktop at this stage. Once added, the image description won't be visible, but will be accessible via assistive technology or back-end code.