Will Including Certain Words in Your Posts Lead to Higher Reach on Facebook?

At the recent Facebook F8 developer conference, the platform's Head of Product for News Feed Adam Mosseri gave an excellent, in-depth explanation of how the News Feed works and how the algorithm decides what content to serve to each user. The presentation really is a must-watch for social media marketers - but there was one point that raised an important question which Mosseri didn't elaborate upon in his notes.

When discussing the key elements that Facebook takes into account when determining a post's relevance - and thus, reach - Mosseri noted that when the post was created is an important signal, but not the most important. You can hear to Mosseri's explanation at around the 3:20 mark of the video:

"We look at when the post was originally created. We know that recency is a really important signal for relevance, but we think it's not the only important signal. So an example would be I have a cousin, her name is Margaret, and she actually recently got engaged. If she had posted that on Facebook last Friday and I hadn't been to News Feed since then, and this morning my brother had posted a picture of... I don't know, a breakfast sandwich, I'm probably more interested in Margaret's engagement story than my brother's breakfast sandwich, even though her story's a bit older. But hopefully, if we're doing our job on News Feed, Margaret's story would show up at the top, maybe followed by my brother's sandwich."

The explanation makes perfect sense, Facebook needs to ensure stories about important life events take precedence so users don't miss any major updates from their friends and family. The question, however, is how does the algorithm determine that post's elevated importance?

When you look at the important ranking factors for posts in the News Feed, they are (as noted by Mosseri). 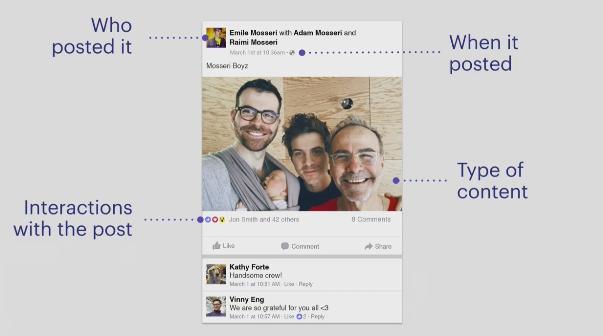 Using Mosseri's example of his cousin getting engaged, there's nothing obvious in that particular update that would push it higher in priority, other than interactions with the post - if a post from a relative or close friend is getting a heap of response, then it's likely to show up higher in your News Feed. But that still wouldn't necessarily cover the use case Mosseri's highlighted here. What if the news of his cousin's engagement only generated a few responses, yet it's still important news - how can the News Feed determine that this is a significant announcement that you need to see based on the data available?

The only way this seems possible is through the use of trigger words, certain terms and phrases that the News Feed algorithm picks up on in order to rank a post higher. The use of trigger words makes sense, and it also makes sense that Facebook wouldn't want to promote their existence - if people were to know about them, you'd see a raft of posts like this: 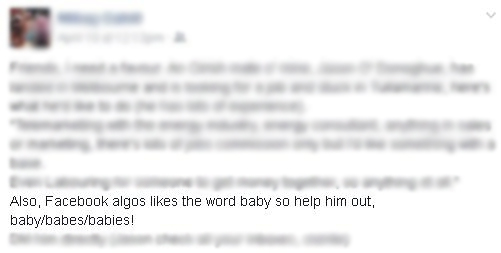 If too many people start using these terms in a non-genuine way, that might skew the algorithm and impact the user experience.

A Message from the Top

The first reports that suggested Facebook's algorithm might use trigger words when ranking posts came from a story involving the CEO, Mark Zuckerberg himself back in 2014.

Apparently, so the story goes, Zuckerberg was looking through his News Feed one day and he came across a story about the birth of his niece, way down in the feed. The top story in his feed that day was the birthday of a co-worker. This made no sense, so Zuckerberg urged the News Feed team to come up with a new way to rank posts to ensure important content, like significant life events, shows up higher in the feed.

Their solution, in this case, was to give a boost to posts when the word 'congratulations' appears repeatedly in the comments. That makes it harder to game, as you can't just add in 'congratulations' in your own update, you have to elicit this response from other users.

Since reports of 'congratulations' being a trigger word came out, various writers and analysts have experimented with the system to see if they could generate more reach by using it to their advantage. In a post titled "Tricking Facebook's Algorithm", writer Caleb Garling conducted an experiment to see whether he could create a post that would garner congratulatory messages and responses in order to get more reach. 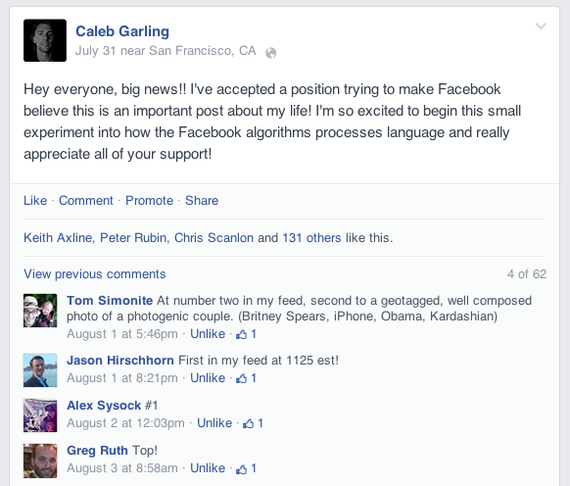 And the result? The post generated 134 Likes and 62 comments and appeared at the top of a lot of his friends' feeds. While this experiment was conducted some time ago now (July 2014) and you would expect the algorithm to have evolved since then, the test does give some validity to the fact that Facebook's system uses trigger words as a means of ranking posts. Of course, Garling's post also got a heap of Likes and comments, so those would definitely have contributed, but the fact that the post even reached that many people in the first place adds weight to the argument.

And as noted, it makes sense. Definitely, in the case of 'congratulations' in post comments, there's a simple logic there - the types of posts that people are sending you congratulatory messages for are, most likely, more significant than others, but even in the case of an engagement, as per Mosseri's example, it's logical that Facebook could use this as a trigger to ensure that content gets seen, even if it's not as recent.

In a similar experiment, journalism professor Jay Rosen repeatedly wrote 'big news' in his updates to spark wider reach, which he claims he saw, but that expanded attention came at the expense of post quality and overall annoyance to his followers.

And this, apparently, is why Facebook's not overly concerned about such attempts to game the system.

A Facebook spokesperson told The New York Times that:

"We estimate that the number of these types of [experimental] posts is very very small. In addition, while these types of posts probably work for people one time, there's a good chance that their friends are likely to ignore or hide future posts like these, meaning that they would appear much lower in News Feed."

The statement, in itself, adds more credence to the fact that Facebook uses trigger words in their assessment - but other than 'congratulations', how, exactly, could such terms be used? And what might those other trigger terms be?

As noted in the earlier example, rumors have suggested that 'baby' is also a trigger word that can get the attention of the News Feed algorithm, which, again, makes sense. Others terms that could signal a story regarding a significant life event might be 'engagement', 'engaged', 'she said yes', 'married', 'new job', 'big news', 'moving house'. The key, essentially, would be that the trigger term would have to relate to a life event and not to anything else more vague. For example, 'moving house' might be important, but 'moving' by itself is likely included in a heap of non-relevant updates, so you'd think the algorithm would have to discount that mention by itself unless it was within a certain range of another key term.

A rumor circulating recently suggested that 'Facebook' itself was a possible trigger word, though I can tell you, we post a lot of updates about Facebook at SMT and we see no direct correlation in reach based on the use of it alone. And really, 'Facebook' being a trigger term doesn't make a heap of sense - the overarching mission of the News Feed is "to connect people with the stories that matter most to them", and Facebook's success in doing so is what's seen it continually boost user and engagement metrics. The News Feed algorithm needs to show people what they want to see, not promote Facebook more widely, and as such, there's little logic to support 'Facebook' being a focus term.

Really, if you gave it some thought, you might be able to find ways to game the algorithm and generate more reach through the use of relevant trigger terms, but you'd expect that it would only relate to personal updates, Pages would have to be exempt from such boosts. And as noted by previous experimenters, while you might gain more reach, you might also be losing out in credibility, and hurting your ongoing reach as a result, particularly if you were to overuse such measures. This effectively means Facebook's safeguard is the system itself - you might be able to cheat the system once or twice, but eventually, your followers will get sick of such tactics. It's sort of like a 'Boy Who Cried Wolf' scenario, where no one will actually want to listen to you when you do have something significant to say because you've spent so much time spamming them with these unusually crafted posts.

So do trigger words exist that might enable you to cheat Facebook's algorithm and get more reach for your personal posts? Most probably they do, the evidence seems to suggest such a system is in place.

Should you use them for that purpose? Probably not.

As noted, the News Feed system is designed to show people more of what they want to see and what's important to them - in order to game it, you need to work in a range of unusual terms and spark the relevant audience response. How do you work 'engaged' and/or 'she said yes' into a personal post which is not actually about getting engaged in a way that prompts people to reply with 'congratulations'? You could probably do it, but the cost would be both time, for you to think of a relevant post, and annoyance for your followers who have to read your ill-constructed and artificial missives, which could be more damaging in the longer term.

Basically, you could try and game the system, but you'd ultimately be gaming yourself - working to generate real, genuine response and interest from your audience is a far more effective and sustainable practice. It might take more time, but trying to cheat the process any other way won't come with any guarantees - other than the fact that it'll annoy your followers.