Out of all recent social media trends and tactics, social selling is one that fascinates me the most. Funnily, it might also be the most underrated tactic of all. That’s why a few months ago, the Awario team and myself decided to do a little study to find out how brands are engaging with sales opportunities on social, and whether social selling has a positive ROI.

In this article, I want to tell you about the Social Selling Study we did and share the most exciting takeaways. But before we get to that, let's address why we did this study in the first place, and why we believe social media has enormous potential for sales teams.

What’s social selling and why does it work?

Let’s start with the definition.

Social selling is the process of leveraging social media to do lead generation, build meaningful relationships, and eventually, close sales.

But, oftentimes, social media is not seen as a platform for generating leads and especially closing sales. If we turn to the classic way of describing consumer behavior and the sales funnel, social media marketing is typically used for raising awareness exclusively, letting other tactics step in on the later stages. 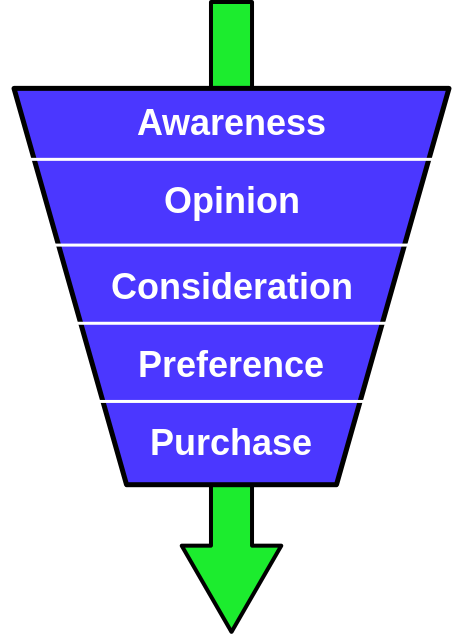 However, I beg to differ. Social media is a genuine source of quality leads, and, in many cases, it even outperforms traditional ways to do sales. According to a survey by Sales for Life, companies which engage in social selling get a 119% higher ROI compared to traditional sales tactics.

Obviously, the nature of social media changes the way you are going to sell your product; but in my opinion, it changes it for the better. Here’s how social media creates a distinct environment for better sales:

Taking all of this into consideration, we’ve decided to start employing social selling for our own benefit at Awario. We’ve also decided to conduct a little experiment to see how widely this strategy is used among big brands across different industries.

Although social selling can be done in a number of ways (social media ads, contests and so on), we wanted to focus on straightforward pitching and selling a product or service on social media.

For this experiment, we’ve chosen companies from six different industries to look at how they engage with prospects on social:

We deliberately chose companies that would represent both B2B and B2C business models. We used our own tool, Awario, to analyze their social media presence and find leads — social media posts which expressed buying intent.

Overall, our team focused on two platforms: Twitter and Reddit. We analyzed the social data from June 1 to August 23, 2018 (a 12-week period).

What did we find?

As I mentioned earlier, engagement is one of the unique benefits of social media. That’s why it’s fascinating to learn the reasons behind brands’ interactions on social media. Why and when do they decide to engage? After we analyzed the data, we found that the most common reasons for brands to interact with social media users are: As you see, the most popular reason for interaction is customer support: some brands even create separate Twitter accounts for social customer care specifically. The only accounts that didn’t have customer support as the main “excuse” for social interactions were the accounts of freelance designers - they focused on relationship building much more. 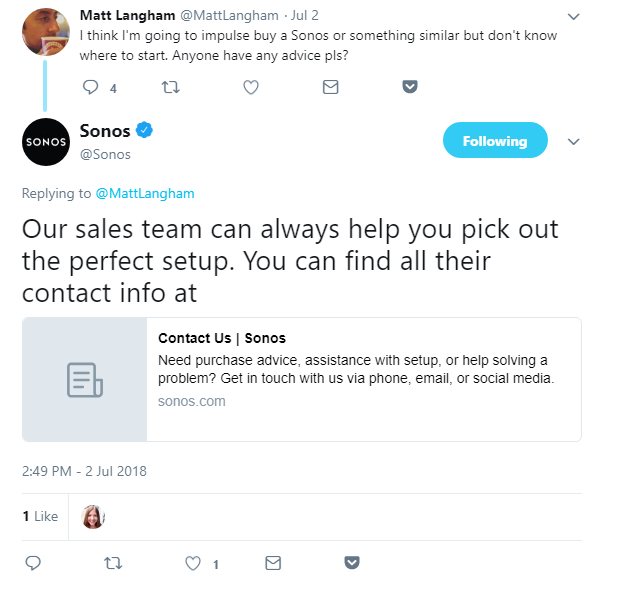 Keeping that in mind, we went to Awario to see how many social selling opportunities were out there for these brands. Maybe the low number of social selling examples meant that there just weren’t enough prospects on social?..

We used our tool, Awario Leads, to find posts which expressed buying intent based on the description of services or products the brands offer. For example, for Internet service providers, the tool would find posts like “Can anyone recommend a good internet service provider?”. It’s also able to find complaints about a brand’s competitor since such posts might present an opportunity for making a sale as well.

Interestingly, we found a decent number of targeted leads for each industry we analyzed. Some of the posts didn’t receive a single reply, which means that had brands actually replied with a pitch, they wouldn’t have any competition. 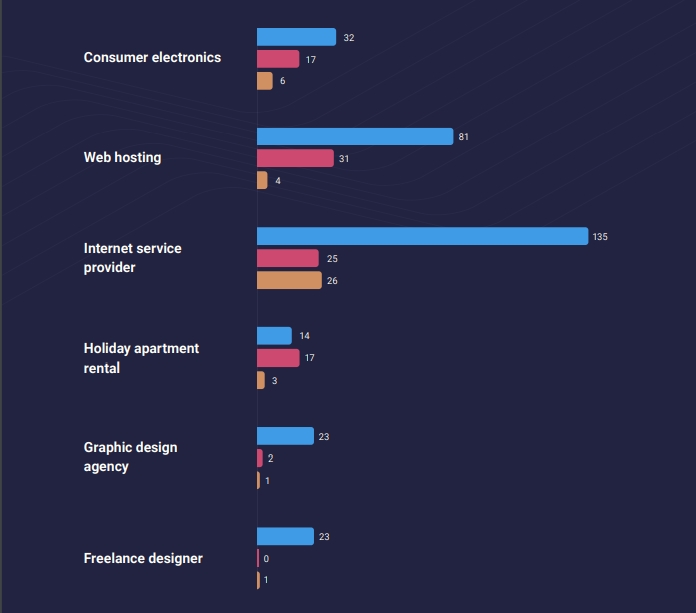 Throughout the 12 weeks of the experiment, there wasn’t a single industry that wouldn’t generate at least 20 leads. Out of the industries we looked at, ISP yielded the most results - 160.

We can see that depending on the industry, companies may be missing out on up to 160 leads every month. Moreover, by not engaging with these prospects, brands overlook an opportunity to aсcess an audience with similar interests and needs - the prospect’s followers. As I’ve mentioned before, since May 25th we have been engaged in a consistent social selling strategy ourselves. We’ve responded to sales prospects which Awario would find and, depending on the prospect, either sent the user to one of our social media accounts or shared a link to our site.

At the end of the campaign, we sat down to analyze the results, and they weren’t disappointing. 70% of our replies got a positive response from the sales prospects: 33% liked our tweets and 37% responded agreeing to check our offering out. The links that we shared got a 117% click rate - which means that the pitches reached not just one sales prospect but a wider audience as well: their followers and connections.

Overall, we got over 17,000 impressions for our social selling tweets. What have we learned?

The Internet is saturated with ineffective marketing messages aimed at everyone and no-one. Social selling gives your sales team a magical ability to find people who are actively looking for your product and reach out to them in a human and genuine manner. I truly believe that the days of cold calling and impersonal email marketing are gone, and the days of mutually beneficial human marketing are almost here. The pioneers can get all the benefits of social selling right now, and I urge you to be one of them.

Check out the full Social Selling Report with all the findings and comprehensive analysis of the data.