Social media can be great for engaging with your audience, marketing your products and providing customer support. What’s often ignored, however, is its role as an early warning signal of an impending crisis, a crisis which may have the potential to destroy the reputation of a brand.

A crisis can spring from many things. For example, customer support that doesn’t meet the mark, a product recall, a careless email, a website crash, a mismanaged marketing campaign. A crisis can also be sparked by an angry customer, a bitter employee, a vengeful competitor.

My point? A crisis doesn’t necessarily start on social media, but in our always on world, it invariably ends up there - and can spread like wildfire.

Here's an example - following the Boston Marathon in 2017, as part of a marketing campaign, Adidas sent an email with the subject line:

In 2013, the marathon was hit by a bomb attack which killed three people, and as such, the wording of their promotional message was insensitive. An innocent mistake from Adidas. A mismanaged campaign. And no surprise, the brand was hit hard on Twitter.

In this post, we'll look at the various aspects to consider in social crisis planning and management, with a view to helping you avoid the worst of such situations.

According to communications services company, Burson-Marsteller, only 51% of brands have a crisis plan in place, with only a third of them believing it'll actually work.

A crisis can strike anywhere, and let me be clear – for many it’s not IF it will happen, it’s WHEN. You need to be ready to manage it.

What is Crisis Management?

A single explanatory press release is no longer enough - we live in an always-on, digital world, and as such, your plan needs to encompass social media, internal communications, supply chains, vendors, and the press.

A comprehensive plan will include:

Yes, there’s a difference. If you catch an issue early, the ensuing crisis can be avoided.

Don’t ever, ever ignore or delete a social media mention that’s negative in the hopes that it will go away. Believe me, there are companies that do that, and it’s a huge mistake. Issues don’t go away if ignored, they escalate, and then escalate some more, and can then they become a crisis.

Implementing a social media crisis management plan that works hand-in-hand with a social listening tool will enable you to catch issues early. You’ll be able to monitor and identify critical information regarding your audience, influencers, customers, and your competitors, effectively enabling you to best manage a crisis.

Before, During and After

I’ve divided my crisis management plan into three parts: Before, During, and After the event. To be clear, each stage is equally as important as the next.

It’s all in the preparation.

Social media is your life, your job. You spend hours every day watching, responding and analyzing. You don’t have to be such a hero.

Your social listening tool will save you time - it'll catch all those mentions that you missed, and it'll see and hear what you don’t.

What You Should be Monitoring

Set up smart queries in your social listening tool - your eyes in the back of your head, your second set of ears - to monitor the numerous aspects of your business and industry.

Here are some example queries that Coca-Cola might use:

Setting up alerts to go beyond the limitations of human eyes and ears, will ensure that you'll find instances of:

Identifying the Type of Crisis

You need to understand what kind of crisis you’re dealing with, what level:

Escalating and Responding to a Crisis

Be quick, be honest, be transparent and be sorry. 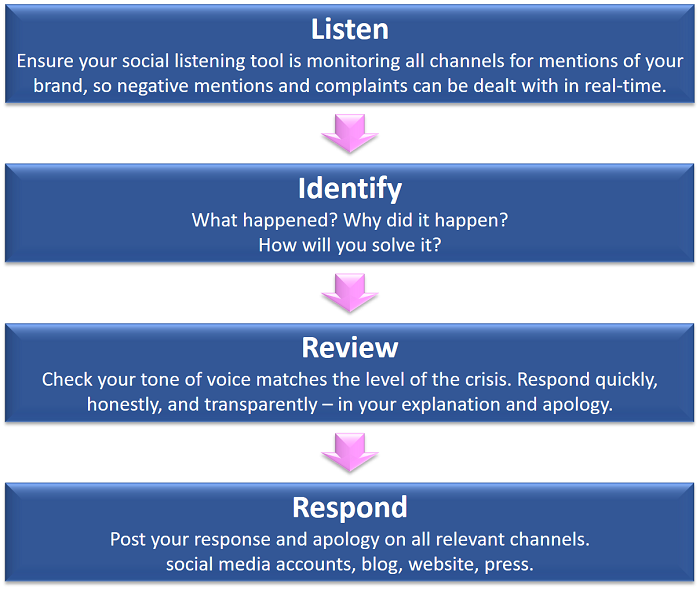 Assess the impact that the crisis had on your brand. Is the damage irreparable? How many followers did you lose? What were the levels of negative sentiment?

Analyze how you and your team handled the crisis. Did your plan stand up to a real-life crisis? Could it be improved, do you need more team members, etc.?

Remember, it doesn’t stop when the crisis is over.

A crisis can have devastating consequences on a business, but preparedness is everything, and can greatly improve your ability to respond, and recover, quickly from such an incident. Hopefully these notes will help you go about planning your own crisis strategy.