Elon Musk has found another way to spark controversy, and get more attention for himself and his tweets - though this one could be a step too far in his Icarian approach to managing the app.

Apple has mostly stopped advertising on Twitter. Do they hate free speech in America?

Attacking a key host platform, with a significant amount of Twitter users accessing the app via iOS, seems like a risky proposition, but it's pretty much in line with Musk's approach thus far, in seemingly throwing caution to the wind, and putting the entire business on the line, which will either pay off in the long run through improved operating conditions, or it'll kill it entirely.

That latter, I would note, seems unlikely, but if Musk wants to challenge Apple's App Store rules, it could very easily remove Twitter from its platform, with disastrous impacts for Twitter itself.

So what is Elon actually protesting here?

Well, for one, Apple, as Musk notes, has reduced its Twitter ad spend, and further reporting suggests that Apple was Twitter's top advertiser in the first quarter of this year, pouring $50 million into Twitter's coffers.

Which is the second element that Musk's unhappy with - Elon has been a vocal critic of Apple's 30% App Store fee for years, and he's once again raising this as a significant impediment to progress.

Tesla app users also get hit with this fee, and Musk has long criticized Apple's controlling moves in this respect.

But of course, to stoke maximum controversy, and gain the most attention as a result, Musk is also making this about 'free speech', and Apple's App Store regulations, which enable it to remove apps that don't properly police content to weed out hate speech, threats, etc.

Musk says that Apple has already threatened to remove Twitter from its App Store if it fails to maintain compliance with these regulations, as part of the coming changes at the app, which Musk is now also using to frame Apple as an opponent of free speech by imposing such rules on app developers.

Which is par for the course with Musk, in mobilizing his fanatical supporters to drive his own agenda for optimal business benefit. Yet despite his various proclamations on the topic, thus far, Twitter's policies on freedom of speech haven't actually changed, other than Musk allowing some previously banned users back on the app.

So is this Apple conflict just another attention-grab, and not reflective of his actual approach?

It’s hard to tell what’s what as Musk’s Twitter 2.0 evolves, because on one hand, he’ll be telling advertisers that there’s no change to Twitter’s policies, and that they should feel safe advertising in the app. While on the other, he’s talking about how Twitter now allows free and open speech, which ‘goes against the media’s narrative’.

Though the latter is, at least in part, a publicity ploy. Musk knows that some of his biggest supporters are backing his push to combat what they perceive as media bias, so he plays into that with his various tweets on the topic, while in reality, again, Twitter’s policies haven’t actually changed.

Back on November 8th, Musk tweeted out a link to Twitter’s current ‘Twitter Rules’ document, and noted that they would evolve over time. That document, at least thus far, remains unchanged, but Musk has since (on November 19th) tweeted that:

Negative/hate tweets will be max deboosted & demonetized, so no ads or other revenue to Twitter.

You won’t find the tweet unless you specifically seek it out, which is no different from rest of Internet.

Now, that’s not technically a change to Twitter’s rules, but Musk seems to be trying to play both sides, by allowing tweets that would be considered ‘hate speech’ to remain in the app, while also making it much harder for people to find such. In this way, Musk can maintain his appeal to advertisers, by telling them that their content won’t be displayed alongside such material, while also enabling him to keep tooting his free speech horn for his fans.

But again, technically, Twitter’s rules haven’t changed. Yet that hasn’t stopped Musk from repeatedly claiming that he’s ‘fighting for free speech in America’.

Of course, Musk has also unbanned thousands of accounts that had been suspended for violations of Twitter’s rules, and he’s side-stepped his previously stated plan to implement a content moderation council to oversee such decisions, essentially taking the reigns himself on moderation concerns.

But really, Twitter’s rules, thus far, haven’t changed. So is he really making Twitter more ‘free speech’ friendly, or is this all just bluster designed to make him look cool in front of his fans and supporters?

As with everything Elon, it’s a bit of both.

Like Trump before him, Musk uses Twitter as an unfiltered stream of his every thought, good and bad, which, also like Trump, has helped him gain a massive following in the app, and is now a direct driver of media coverage and headlines, helping to further fuel his notoriety. That’s also, seemingly, driving more interest at Twitter, but in private meetings, Musk is also undoubtedly working to assure advertisers that what he’s doing via his tweets and statements is essentially a PR exercise, while in reality, the business of the platform remains the same.

That’s why he expects them to keep spending money with the app, money that he desperately needs in order to claw back his $44 billion investment.

But the reinstatement of previously banned accounts is a concern for ad partners, as are Musk’s public statements, whether they’re reflective of the platform’s actual process or not.

His decision to attack Apple likely won't help - though it is essentially what he threatened to do a few weeks back.

Musk's previously flagged a ‘thermonuclear name and shame’ of Twitter ad partners that had cut Twitter ad spend since his takeover at the app. Which is probably not the way to win them back, while in Apple’s case, Musk has gone even further, claiming that Apple is censoring apps and businesses through its policies. He’s even launched a Twitter poll to ask whether ‘Apple should publish all censorship actions it has taken that affect its customers’.

Again, picking a fight with the provider that facilitates reach to more than half of your audience is probably not the ideal approach - but it’s another means for Musk to reinforce his support, while also potentially showing other ad partners that he’s not afraid to call out even the biggest companies, and put them on blast with his many supporters.

Will that stop others from cutting Twitter ad spend? According to reports, many Twitter advertisers have already paused all campaigns, while Media Matters reports that 50 of the platform's top 100 advertisers, which have accounted for over $2 billion in spending since 2020, have halted their initiatives in the app.

Coming into Christmas, and the biggest ad push of the year, that’s clearly going to have an impact on Twitter’s bottom line.

Will Musk’s angst be able to win them back?

It’s also a transitionary period for the app, with Musk pushing to make subscriptions account for a much bigger share of Twitter’s overall revenue pie. That would then enable him to avoid more censorship rules, because he’d no longer be beholden to brand safety concerns – but even then, both Apple and Google have strict rules around moderation in the apps provided via their stores which would impact Musk’s total free speech push.

So either way, Musk will be restricted in what, exactly, he can do on this front, no matter how loudly he wants to call out Apple and Co. for their policies.

Which, again, points to Elon’s public statements about such being more of a media stunt than an actual business strategy, with Musk now seemingly looking to paint Apple as the villain that will impede his ultimate goal of giving the people what they want (note: Musk has since deleted the below tweet). 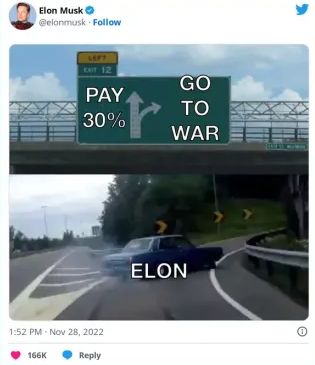 How does that end?

Well, ultimately, with Twitter playing by Apple’s rules, or getting booted from the App Store, and losing connection with millions of users. The former is far more likely, but that won’t stop Musk from milking such conflicts for all they’re worth, and painting himself as the hero, in order to cement his popularity with his target audience.

But again, it is worth noting that what Musk says and what he does are often different. And that the very person looking to highlight the ills of the rich elite is himself the richest and most elite of them all – and he’s using that division and angst as a ploy to make even more money.