This week is UNESCO Global Media and Information Literacy Week, and to mark the event, Google has announced some new web literacy elements for users in Europe, including an expansion of its ‘About this result’ info panels in Search, and a new digital education initiative, in partnership with European libraries.

First off, Google’s rolling out its ‘About this result’ feature in several new languages - Portuguese, French, Italian, Dutch, German and Spanish. 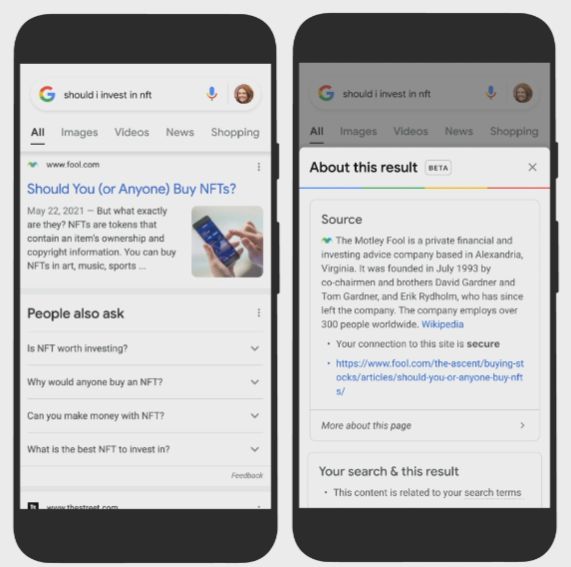 “Next to most results on Google, you’ll begin to see the option to tap the three dots to learn more about the result or feature and where the information is coming from.”

As you can see in the example screens above, Google’s ‘About this result’ panels provide more information on the source website for each listed result, including a description (sourced from Wikipedia), reviews of its content, and other related notes to provide more context and insight.

Google first launched ‘About this result’ to US users in February last year, and it’s been gradually refining and iterating on it ever since. Now, European users will also have access to the extra information panel, which could help to limit the spread of false or misleading information via Google Search.

On another front, Google’s also working to improve digital literacy via a new initiative, in partnership with libraries in Europe, which will see librarians and library staff trained on best practices by information literacy experts.

“Google’s partnering with Public Libraries 2030 to launch the Super Searcher training program in Europe. Under this partnership, librarians and library staff across Europe will be trained on best practices from information literacy experts, including how to use tools like About this result on Search to help evaluate information online.”

Stemming from this, the hope is that these staff will then be able to educate library patrons to help strengthen their information literacy skills, which could be a big step in boosting digital literacy more broadly, which is a key skill that should be on all school curriculums.

Which, increasingly, is the case. Schools in most regions now provide at least some online safety elements, but at the same time, most don’t incorporate insights on potential misinformation, and how to examine web content to determine its trustworthiness.

Some regions are moving in this direction. In Finland, the detection of misinformation is now a key element in its education curriculum for all students, which has helped the nation reach the top of the global rankings in overall resiliency to the impact of fake news.

But then again, that’s younger people, and its more often older users that are likely to spread false reports. Which is why this new Google program is important, providing direct lessons for what will generally be older patrons of libraries across Europe.

It seems like a good step in the right direction. Google says that the program will be offered in 12 countries in the coming months.