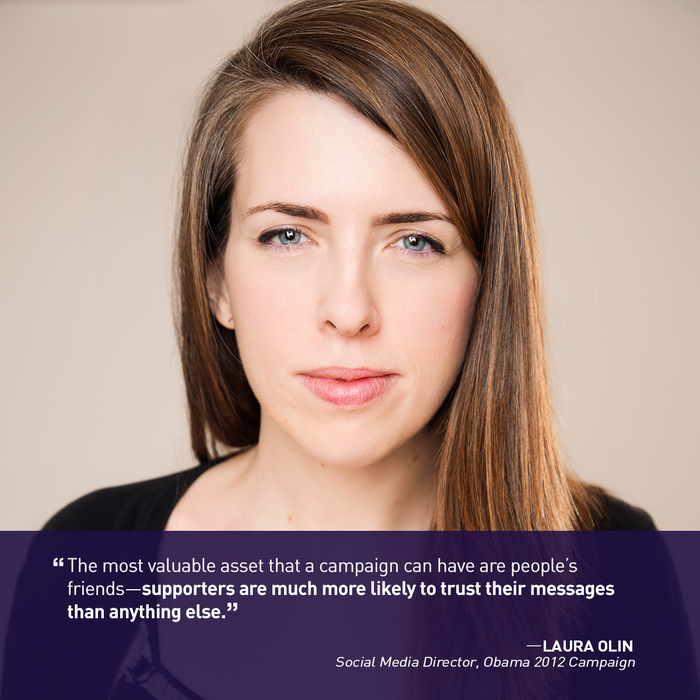 I recently spoke with Laura Olin. She's a veteran digital campaigner who helped set the editorial voice for the Obama 2012 Campaign's social channels among many other candidates. You're going to hear all about politics and social media.

What goes into the strategy behind a politician's social presence?

"The number one question we ask is "who are we trying to reach?" For the Obama campaign, one of our main tasks was to re-energize the huge swath of young people who were responsible for getting him elected in the first place. We really looked at our social presences in terms of how to reach these people and how to do it in an authentic way. Don't be lame. Don't try too hard and don't be false. We were really conscious about trying to stay on the good side of that line and speaking to people on social in a way that sounded like what people were hearing on those platforms already. We also wanted preserve the dignity of the office and get our message across."

What metrics matter the most to a campaign?

"Usually it's a trade-off between sharing something and clicking through because people either do one or the other. It really depends on the goal of the specific post but it's generally centered around reach and conversions. The ultimate target for a campaign is not necessarily your existing supporters but rather those supporters' friends as people are more likely to trust their messages. It's all about the power of influence."

- "The number one question you should always ask yourself is "who am I trying to reach?"

- "The most valuable asset that a campaign can have are people's friends - supporters are much more likely to trust their messages than anything else."

- "It's all about the importance of making progress on issues that will impact real people's lives."

​Enjoy, and check back here for more episodes of the All the Social Ladies podcast on Social Media Today.

This article was originally published on Apple News: