While it's still in the process of rolling out its new Messenger Rooms group video chat feature to all users, Facebook has today announced that Messenger Rooms will also be available within groups and events, providing another engagement option within smaller audience subsets.

First off, on groups - Facebook says that both group admins and members will be able to create dedicated group Rooms from the Groups composer, in which they'll be able to host video chats of up to 50 people at a time. 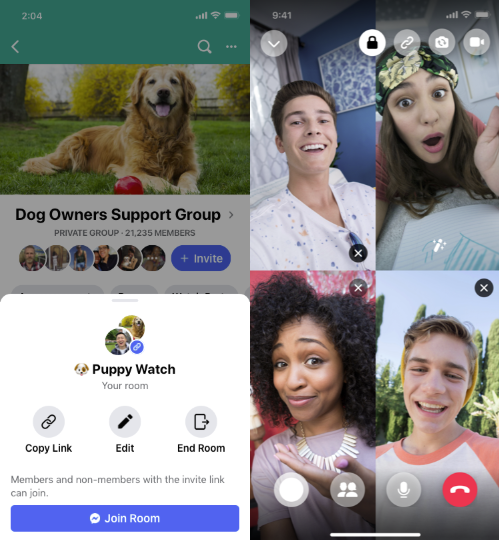 Though there are some additional control options for Group rooms.

The main point of note is that group admins will have the ability to allow Messenger Rooms within their group, or not, while admins will also have the option to make their group Rooms “admin only”, meaning that only admins have the capacity to create them, but any member can join the chat.

Alternatively, admins will also be able to allow any group member to create a room, which will then be shared among group members.

Those extra controls are important, as it will give group admins capacity to manage the interactions within their groups, as opposed to it being a free for all in the video chat.

And Messenger Rooms for Groups could also be a means to expand the reach of your groups:

"Group members will also be able to add link sharing to make it easier to invite more people to their room, including people who aren't your friends, a member of the group or who don't have Facebook or Messenger."

Inviting non-members could be a good way to invite new people in, and give them a taste of what the group, and its discussions, are all about.

In addition to this, Facebook's also adding Messenger Rooms to events, with users now able to mark their event listings as an “Online Event.”

"To help people engage more deeply when they attend an Online Event, we’re also integrating our new Rooms feature. This allows people to invite friends, family, classmates and colleagues to hang out with anyone from anywhere through easy to share and join video chat links."

Rooms will only be available for Private Online Events, but again, it adds another engagement option, and a means to facilitate connection among like-minded people, with a dedicated space and time for relevant discussion.

As noted, Messenger Rooms is in the process of being rolled out, with Australian users getting access to the option last week.

It's still a bit clunky, with some buttons working and others not, while the notification process is not great. But still, given the rise in video connection, Rooms fits into the current trends, and adding dedicated Rooms options for groups and events could be a great way to facilitate active discussion among specific audiences.

In addition to this, Facebook also added this interesting note about the return of its 'Live with...' guests option for Facebook Live:

"We heard from our community that the ability to co-broadcast with another person in their Facebook Live videos would be especially useful during this time, so we are bringing back Live With and will introduce new features in the coming weeks to make the experience more interactive."

New features for your live-streams with guests? Could be interesting.

We'll keep you updated on any announcements on this front.

Messenger Rooms for Groups and Events are being rolled out across iOS, Android, and desktop.