Facebook has announced a new set of measures to tackle on platform bullying and abuse, including tools to protect high profile users and options for people to report problems on behalf of others.

First off, Facebook's adding a new comment moderation tool which will enable users to delete multiple comments at once. 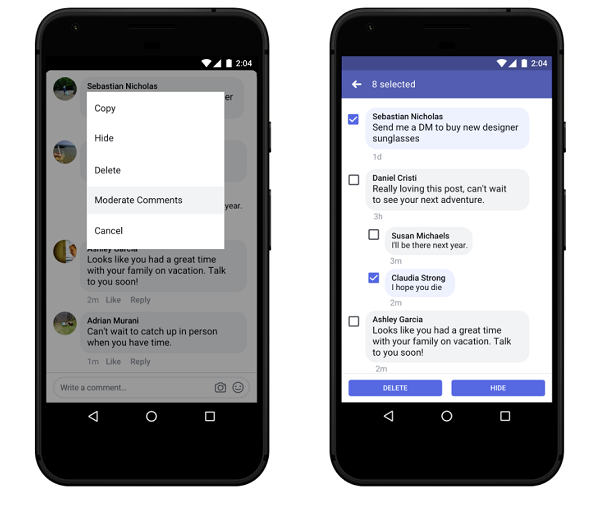 The tool will make it a little easier to manage your interactions on Facebook, helping you to both get rid of negative comments for your own sake, while also protecting your community from such exposure. Facebook says that it's also testing ways to "more easily search for and block offensive words from appearing in comments".

The new comment moderation option is rolling out on desktop and Android first, and will be available on iOS in the coming months.

Facebook's also providing new tools which will enable users to submit an issue report on behalf of someone they see is being bullied or harassed on the platform.

"Being the target of unwanted attention can be stressful and some people may not feel comfortable reporting a bully or harasser. In other cases, bullying or harassment happens out of sight from victims. If you see a friend or family member being bullied or harassed, now you can report someone on their behalf via the menu above the post that you are concerned about. Once reported, our Community Operations team will review the post, keep your report anonymous, and determine whether it violates our Community Standards."

The use case here makes perfect sense, and it'll help to have another way for Facebook to detect and remove such comments, without the onus totally being on the victim.

In addition to this, Facebook's also looking to add in new protections for public figures - particularly younger people in the spotlight.

"Our bullying and harassment policies protect private individuals, but we permit open and critical discussion of people who are featured in the news or have a large public audience based on their profession or chosen activities. We’ve talked to people who use Facebook as well as safety experts to find ways we can better protect these public figures from harassment. Earlier this year, we expanded our policies to guard against the harassment of young public figures on Facebook. In the coming weeks, we will further expand our policies to better protect public figures against harassment regardless of age."

One of the most prominent examples of this was the recent meme trend involving Stranger Things actor Millie Bobby Brown, who's 14 years old. The trend, which used Brown's image in offensive memes, eventually lead to the actor quitting Twitter - and there are various other examples of celebrities, young and old, facing unrelenting attacks or criticism online.

As Facebook notes, these people are in the public eye, and thus open for public discussion, but there are still lines that need to be drawn on such behavior. Facebook is now looking to clarify what those lines, specifically, are.

"For example, severe attacks that directly engage a public figure will not be allowed under the new policy. If anyone experiences unwanted behavior on Facebook, they can report the person who is bullying or harassing them, anonymously ignore unwanted messages, and block someone without them being notified."

Facebook also notes that it's constantly expanding its online education programs to help younger users understand the risks online, and the various options they have at their disposal.

"People around the world participate in Facebook’s online safety and anti-bullying programs, built in partnership with experts and community organizations. We recently introduced a new partnership with the National Parent Teachers Association in the US to facilitate 200 community events in cities in every state to address tech-related challenges faced by families, including bullying prevention. Working with partners, we also offer a peer-to-peer online safety and anti-bullying program to every secondary school in the UK. And we support a program in India that has educated tens of thousands of young people about online safety, thoughtful sharing, and privacy and security."

The importance of such programs cannot be overstated. According to the American Foundation for Suicide Prevention, suicide is the 10th leading cause of death in the US, with almost 45,000 Americans dying by suicide each year. The reasons in each instance are complex, but various studies have shown links between social media use and depression, particularly in teens and young users, and definitely, online bullying - which can see victims subjected to such attacks non-stop, in and out of school and other social settings - is a key problem we need to address.

Given this, Facebook should be applauded for its efforts on this front, and its continued work to help potentially at-risk users.