Do you have social media profiles that you check up on regularly, purely out of spite?

You know the ones – that guy you used to date who now tweets radical conspiracy theories, that former school teacher who you really didn’t like, former employers or colleagues who you don’t necessarily wish well.

Everyone has one or two, and now, with this new feature, Facebook’s making it a little easier to check-in on them, with ‘Quick Access’ tabs in Search that highlight your most searched profiles, Pages and functions in the app. 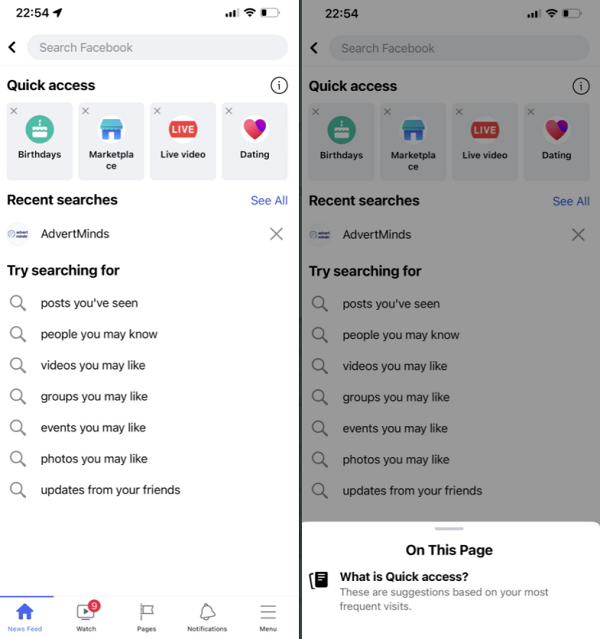 As you can see in this example, posted by Radu Onescu (and shared by Matt Navarra), over the weekend, Facebook started testing the new Quick Access tabs, which appear along the top of the Search panel, above your 'Recent Searches'.

Which is likely not a major time-saver, of course, as you can easily search for whatever you want to find via keywords in the query box, while you can also tap on your most recent searches to query the same again. But it does make just a little easier to quickly get to those profiles that you always check in on – which are most likely people and/or Pages that you don’t follow, as their posts would already appear in your main feed.

Which means you’re probably checking in on them for alternative reasons, other than merely keeping up with friends. In more concerning usage, that could also help to facilitate Facebook stalking, by keeping these quick access points right at the top of the screen, in the most prominent position in Search, prompting you to keep tabs on people beyond your connections.

Facebook does, of course, have various privacy tools that enable users to protect themselves against such. But still, not sure I see any major use-case for these new tabs, outside of regularly poking around on the profiles of people and Pages that you don’t follow, which seems a little odd.

It’s a relatively minor addition either way, which doesn’t seem to add a heap to the process. And as highlighted in the above example, it could also be used to help users quickly access Facebook features, in addition to their most searched profiles, while it might also help users stay in touch with Pages that they’re thinking about following, keeping them top of mind, with a logo included for branding.

It likely won’t have a big impact on user behaviors, but it may help make it a little easier for users to keep tabs on key elements, and maybe Pages as well.

The new test is available to some Facebook users, no word on a broader roll-out at this stage.