Facebook has launched a new resource for educators, in order to help them provide digital literacy skills for young people, and build awareness of the online world.

“Today we’re launching our Digital Literacy Library, a collection of lessons to help young people think critically and share thoughtfully online. There are 830 million young people online around the world, and this library is a resource for educators looking to address digital literacy and help these young people build the skills they need to safely enjoy digital technology.”

The tool is Facebook’s latest effort to address concerns around the exposure of children to the worst elements of the web.

Back in 2016, Facebook rolled out its ‘Parents’ Portal’ in order to provide users with more resources to understand the dangers of social media for their children, and how they could help navigate potential issues.

More recently, however, Facebook’s taken a more active role on this front – earlier in the year, Facebook launched its ‘Youth Portal’, which is very similar to the Parents Portal tool, but with a focus on appealing to young people themselves. 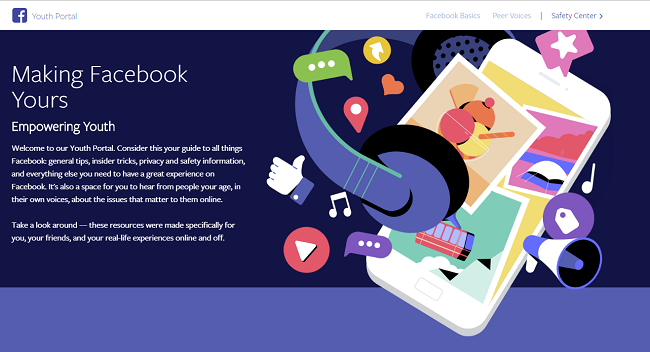 Facebook also recently announced a crackdown on users under the age of 13 – though that did come in response to a report which aired on Channel 4 in the UK, within which it was suggested that Facebook hasn’t been doing enough to stop underage users from signing up.

Providing more resources to educators on this front is a positive move, and will help broaden community awareness of the dangers – which is especially important given that young people often have far more knowledge of the workings of online platforms than older generations who were not raised on the web.

That gap has proven problematic in digital literacy education – given the rapid evolution of social platforms and internet connectivity, it can be difficult for even the keenest observers to keep up with the various changes and shifts. Providing tools to help teachers and advisors with this will simplify the process, and with Facebook constantly updating its resources, it'll make it easier to keep up with threats, and distribute that information accordingly.

Importantly, Facebook’s new resources – built on the back of research from the Youth and Media team at the Berkman Klein Center for Internet and Society at Harvard University – also cover considerations relevant to varying user groups.

“Developed for educators of youth ages 11 to 18, the lessons incorporate learnings from over 10 years of academic research by the Youth and Media team, and they reflect the voices of young people from diverse socioeconomic backgrounds, ethnicities, geographies, and educational levels. The lessons address thematic areas such as privacy and reputation, identity exploration, security, safety and wellbeing, and more.”

It’s another positive step for Facebook. After a flood of negative coverage around the Cambridge Analytica issue and Russian political interference, The Social Network has been pushing hard to underline that they are taking all the various community concerns seriously, and that they're working to provide solutions and tools to assist. Those efforts definitely appear to have softened the flow of negative coverage, but given the market response to the company’s most recent earnings report – in which Facebook warned that future earnings could be impacted by such efforts – they do still have a way to go to please all sides, if that’s even possible.

The addition of new resources for educators also comes as Facebook announced an expansion of its initiative to provide more digital education to US business owners via new partnerships with Columbus State Community College and the National Urban League.

Some will view such initiatives skeptically, as a broad-ranging PR exercise in response to the scandals, but given the amount of money Facebook is investing into these programs, it’s hard to fault their endeavor, whatever your perspective.