Facebook has this week announced the expansion of two of its engagement and interaction-prompting tools - 'Breaking News' tags for publishers and local news modules in the News Feed, highlighting important community updates.

"Over the last several months we ran a test that allowed more than 100 news publishers from North America, Latin America, Europe, India and Australia to identify and label stories as “breaking news” on Facebook. We found that people engaged more actively with stories marked as breaking news, showing us that this product helps people find news that's important to them." 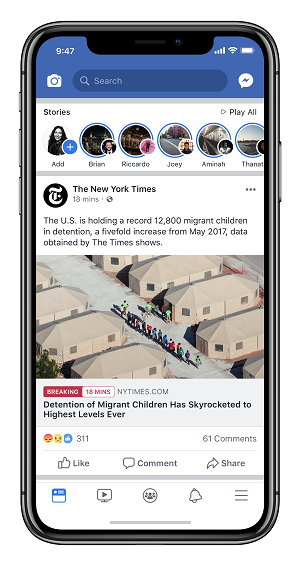 "We're considering the label as a signal of timeliness in News Feed ranking in these countries."

That'll no doubt get publishers more interested in using it.

Given the way Facebook's algorithm sorts content, the platform has never been a key source for real-time updates, but the 'Breaking News' tab provides a way for publishers to generate more engagement and interaction - which, again because of the algorithm, has become an increasingly important consideration over time. How much that will help change the perception of Facebook as a source for such updates is hard to say, but it will likely spark more users to add their thoughts on the same.

The other announcement from Facebook is the expansion of its 'Today In' local news update modules in the News Feed, which will now be made available in ten Australian cities, the first expansion of the option outside the US.

The option provides a range of local news updates, including 'Top Posts from Pages in Your Area', 'Recent Articles from Local Publications', 'Upcoming Events' and updates from nearby schools.

Both tools are in line with Facebook’s broader effort to become a more positive societal element, facilitating more active participation by connecting people to relevant, timely information. This comes after Facebook commissioned a study which found that passive consumption of social media content can be bad for mental health, while active participation can have significant benefits.

Following the misuse of their platform to influence political opinion, Facebook’s very keen to underline the good that it serves, the benefits it can provide. These new offerings are part of that effort.

Facebook hasn't announced plans to expand the local news updates more broadly at this stage, while Breaking News is being tested in more regions.