While the ongoing COVID-19 pandemic has dampened enthusiasm for event days in 2020, today is World Emoji Day, which aims to celebrate those small, cartoonish characters than have now become a significant part of the way people communicate.

Indeed, according to research, some 92% of people have used, and/or regularly now use, emojis in their messaging. Many people who were once opposed to adding smiley faces and the like to enhance their comments now see the utility, and that's lead to platforms like Facebook, Twitter and LinkedIn all providing quick emoji responses, in the form of Reactions on posts, to make it easier for their users to communicate, quickly and effectively, often via smaller, mobile keyboards.

Given this, whether you like them or not, emojis are significant. And marking World Emoji Day 2020, Facebook, Google and Apple have all released new info regarding their emoji options.

First off, Facebook has upgraded its default emoji pack in Messenger with new animations.

Happy #WorldEmojiDay!
An emoji for every mood. Our default sticker pack, “Moodies” got an upgrade with some new animations. #SayItWithStickers pic.twitter.com/FIyzc88j6L

The upgraded animations look pretty slick. Facebook has experimented with various animations for its Reactions and other emoji sets, and that seems like the next level. Facebook-owned WhatsApp also recently launched animated stickers within chats as part of Facebook's broader plan to integrate its messaging platforms.

Over at Google, the search giant has showcased a new set of more diverse emoji characters which are coming to Android this fall.

Google's also shared a preview of new emoji characters, which will be made available with the release of Android 11.

"Hit that piñata or bang on the long drum to celebrate. Send an anatomical heart when the love is so real, so raw. Or perhaps you’ll identify with one of the new animals, like a super cute bison, an eager beaver or a polar bear that just needs a little love. There are also new food emoji, like a tamale (nom nom), a boba tea sure to make you thirsty ("black milk tea, boba, 30 percent sugar please") and even a teapot for those who felt the “hot beverage” emoji (☕) was simply not “tea time” enough."

The anatomical heart seems a bit unnecessary. But maybe that's just me.

Google's also looking to add a new emoji bar for Android devices, which will make it easier for users to add emoji characters in their messages.

"With a growing set of emoji options, and an over 40% rise in the use of emoji during shelter in place, it’s important that you can quickly and easily find and send just the right one. To do this, we’re rolling out a quick access emoji bar to Gboard beta today, and to all Gboard Android users in the coming months. Soon you’ll be able to send not just one, but five red-hearts when you want your friend to know how much you wish you could be there for them."

So, essentially, it's Google's answer to Reactions, but it'll be universally available when users are typing in any app.

Also on the new emoji train, Apple has shared a preview of upcoming emojis that will be added to iOS. 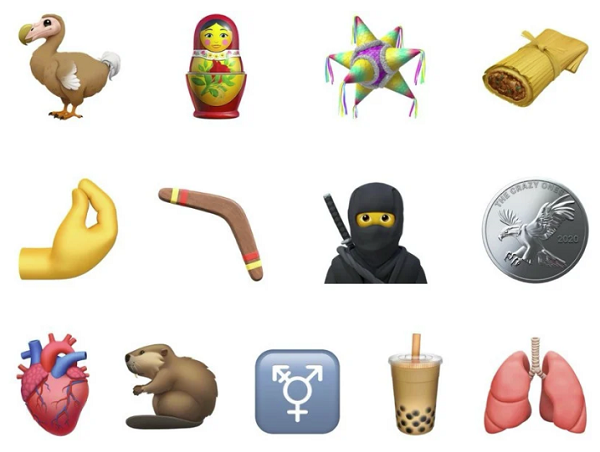 You'll note that these are the same as Google's Android set, just different versions. That's because any new emoji characters need to be approved by the Unicode Consortium, a nonprofit organization which maintains emoji standards and guidelines. Whenever a new emoji is added, it comes via the UC, and is then translated into the characters that you see on your device.

This ensures that messages can be sent between devices, for example, with reference code for each image built into the respective operating systems. They just look a bit different.

As per Mac Rumors, the new updates will include pinched fingers, new animals, and, again 'anatomical heart and lungs'. Honestly, I don't see why people would want that, but there's clearly some use case.

In addition to this, Apple has added new headwear options to its Memoji characters on iOS 14.

With new headwear options and masks in iOS 14 — we’ve got you covered! Happy #WorldEmojiDay! pic.twitter.com/AqQp0QVefV

As noted, whether you like them or not, emoji characters have clearly become a significant element in the modern communicative process, with most people now using them, at least in some form, within their digital interactions.

As such, it's worth noting the latest emoji trends, and maybe celebrating by adding a couple of emojis to your updates today.

Also, as a related aside, please take a moment to pay tribute to Microsoft for somehow making emojis, which are designed to enhance expression, even less expressive than normal text:

It seems impossible that adding emojis could reduce the emotional value of a message, but somehow, Microsoft has found a way. Amazing.