Facebook has committed to a new initiative aimed at broadening diversity within its workforce as part of the Increasing Diversity in Innovation conference which is being held this week, and aims to improve support for underrepresented inventors, specifically, across the tech sector.

"Increasing Diversity in Innovation brings together leaders from the government, academia and the technology industry to discuss ways to support underrepresented inventors. Sessions at the conference focus on unconscious bias, systemic inequity in the patent process, techniques for reaching diverse inventors and the importance of innovation."

Aside from the educational sessions, conference attendees will also each sign a 'Pledge to Increase Diversity in Inventorship', which is a commitment from each organization to increase support for underrepresented inventors.

Facebook, which helped devise the pledge, and is already committed to its goals, has also announced that it's taking its efforts on this front a step further, with an expansion of its program aimed at achieving gender parity in patenting.

"We’ve recently piloted small-group brainstorming sessions for women inventors and will be expanding these sessions to other groups of underrepresented inventors. We’ll also create a mentorship program of women supporting women through the patent process. We’ll publicly share metrics on Facebook inventors that identify as female in the coming year."

Facebook has made various public commitments to improving representation and equality within its workforce, and provides regular updates on its progress towards such via its Diversity and Inclusion report.

Gender equality, in particular, is an important focus for the company, because as shown in its most recent update, Facebook actually saw a year-on-year decline in the overall share of women working for the organization (37% in 2020 vs 36.7% in 2021). 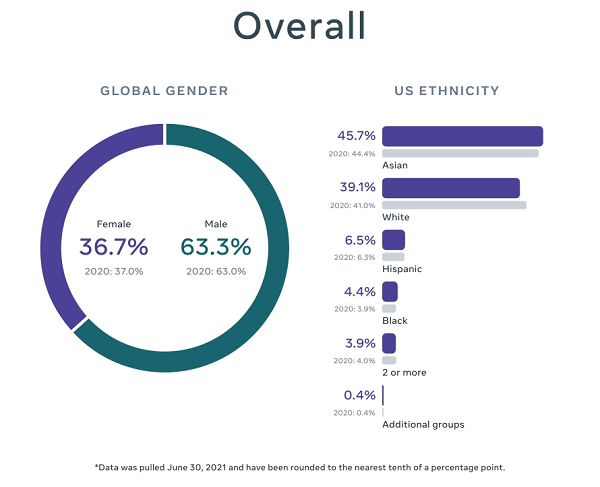 Facebook did see a slight increase in female representation in its tech roles (24.8% vs 24.1%), while 2020 was obviously complicated by the pandemic. But the numbers do show that, despite Facebook's public commitments, it still has a way to go in improving gender representation more broadly.

"...would be impossible without diverse perspectives that represent the ways our products are used around the world"

It is important that the company be held to account on this element, as it can be easy to hear its broader commitments on such and assume that it's making good progress.

Balance, as always, is required, but by Facebook's own description, it needs more diversity within its workforce.

Hopefully, these new elements will strengthen that focus.