Amid testing of hidden like counts in seven countries on Instagram, Facebook is now also considering the same in its main app, with reverse engineering expect Jane Manchun Wong spotting this test Like display: 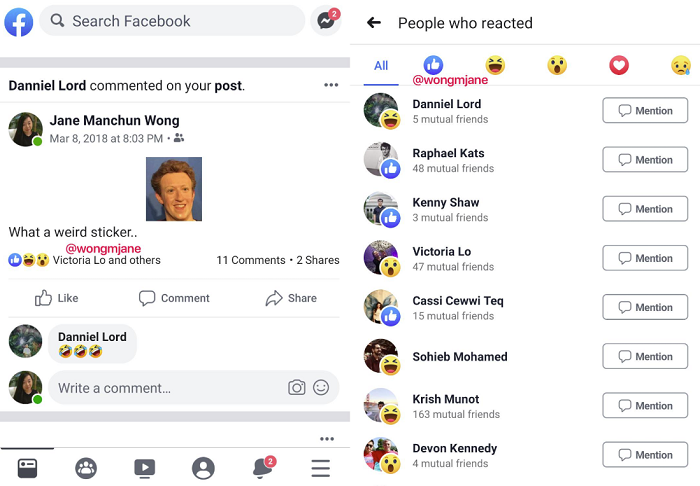 As you can see here, the post Like listing doesn't show the full count, but an indicator of Reactions to the post and an "...and others" summary, as opposed to a full Like listing.

Here's a comparison of the current and test Like listings:

As noted, Instagram began its test of removing total Like post counts for Canadian users back in April, then expanded it to Australia, Brazil, Ireland, Italy, Japan and New Zealand in July. Interestingly, users in those regions can actually still see full post Like counts on the web version of the app, which may slightly skew Instagram's response data - but either way, given that the company is now considering an expansion of the same to Facebook, you would assume that the initial experiment must be showing some signs of promise, based on internal indicators.

The idea of removing Like counts on Instagram relates to that company's broader focus on user wellbeing - in an interview with CBS News in June, Instagram chief Adam Mosseri explained that:

"We don't want Instagram to be such a competition. We want it to be a place where people spend more of their energy connecting with the people that they love and the things that they care about."

The removal of public like counts, according to Mosseri, could reduce social comparison, and its associated negative impacts.

And those impacts can be significant - according to a survey conducted in 2017, Instagram is "the worst social media network for mental health and wellbeing", with the platform contributing to higher levels of anxiety and depression, among other issues. That study, published by The Royal Society for Public Health in the UK, specifically highlighted a "compare and despair" attitude in young people, with users regularly feeling that their lives don't match up to the highlights posted on others' Instagram profiles.

When you add that to the fact that teens regularly delete Instagram posts which don't get enough likes, it's fairly clear that such metrics are contributing, at least somewhat, to these concerns. The weight of evidence, then, would suggest that removing likes can't be bad thing in this respect, but whether it will be a net positive is another question entirely.

The expansion of the program to Facebook would be a major step. Facebook, with 2.4 billion active users, is the largest social media platform in the world, by a significant margin, and while users have most definitely made their opinions known about Like count removals on Instagram, Facebook is going to hear a lot more about the same if it is extended to the main app. Facebook has also become the key platform for many older, less tech-savvy users, who would no doubt be less than pleased by such a change.

Is it worth the effort? Will the benefits be worth the blowback that Facebook will undoubtedly receive as a result?

That's likely what Facebook's weighing up now, but it does appear to be close to an expanded trial.