While TikTok is on the rise, and has continued to gain momentum over the past year, Facebook has been working to quell the app's growth where it can, and stop both Facebook and Instagram users from migrating across to the short video app.

Facebook's main assault on TikTok thus far has been Instagram Reels, which it launched in India last July, just days after TikTok was banned in the region due to ongoing border disputes between India and China. Facebook swooped in to gather up as many TikTok refugees as it could, and Reels has reportedly seen good response in the nation.

And now, Facebook's looking to take the next step, with the launch of a new option in India which will enable Reels users to also share their clips to Facebook as well. 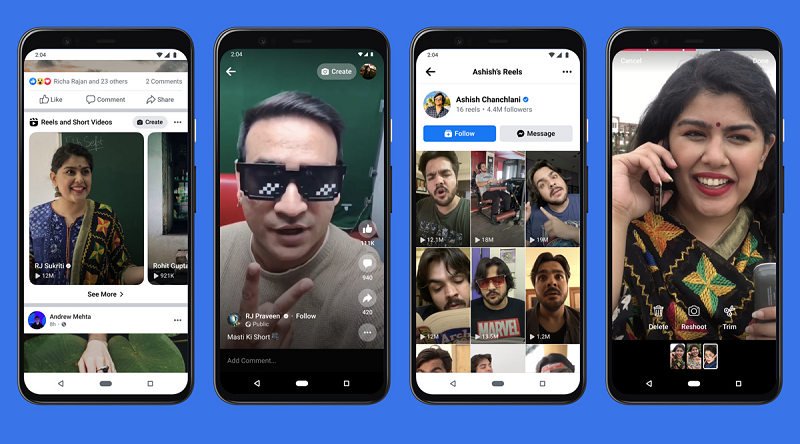 As you can see in these screenshots, posted by XDA Developers, the new functionality will bring a new panel of short video clips into Facebook News Feeds, expanding the potential reach of Reels, and providing more impetus for creators to share their content on Instagram.

Facebook provided the following statement on the option to Reuters:

"In India, we’re testing the ability for Instagram creators to choose to have their Reels recommended on Facebook... creators can reach new audiences and people can create and discover more entertaining content.”

Facebook's actually been testing this functionality for the past few months - back in December, app researcher Alessandro Paluzzi shared images of a new option that would enable users to share their Instagram Reels clips to Facebook via an in-app toggle. That option was refined in February, when another user spotted this prompt in testing.

Facebook says that this is only being tested in India at this stage, but the potential for greater exposure for Reels, if the test is expanded, could be massive, and could become a lure to get more people posting to Reels, maybe even instead of TikTok.

That would be Facebook's ideal. Right now, Instagram offers more reach, and more monetization potential, which Facebook has been dangling as a carrot to TikTok creators to get them across to Reels instead. But with the added reach of Facebook, which could expand your audience by billions, that becomes an even more significant consideration, which could see more creators give Reels some extra thought.

As such, it would make sense for Facebook to eventually expand this cross-linking tool to more regions. Again, India is where Reels has seen its biggest wins, in the wake of the TikTok ban, but if Facebook can use the same options to maximize Reels in other regions, no doubt it will.

It's worth considering, then, what this might mean for your own short video strategy. If Facebook does eventually launch a similar short video panel in other regions, that could provide a prime opportunity to get your content in front of more people. But you won't necessarily be able to re-use your TikTok clips - Instagram has already said that it will look to demote video clips that feature other app branding.

That could see more original content being posted to Instagram Reels instead, adding another element in Facebook's effort to negate the TikTok effect.

Which, as noted, is clearly not working, with TikTok now on track to become the next billion-user platform. But maybe, through little shifts like this, Facebook can at least temper that growth, just a little bit, and deflect some pressure back onto the app.

We'll wait and see whether Facebook expands this new test.