Months after launching its new Facebook Gaming app on Android, Facebook has this week released the iOS version of its revamped mobile gaming platform - though in a slightly different form to what had been originally planned.

See if you can spot the difference - here's the preview for the Facebook Gaming app on the Google Play Store:

And here are the preview screens on the App Store: 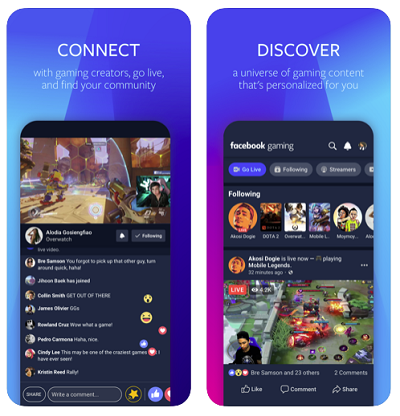 The 'Chat' and 'Play' screens are not listed on the app store. That's because Facebook has had to remove some functionality from the app for iOS due to App Store regulations, with Apple refusing to approve the app with mini-games included.

So, because the app facilitates both watching gaming content AND playing mini-games, it falls in between Apple's classifications, and can't be approved with both functions. Facebook has criticized the process, joining various other companies that have complained about the App Store's stringent controls.

But, Facebook Gaming is now available on both mobile platforms, which will bring more viewers to Facebook's gaming content.

????????me poking around the NEW facebook gaming app on iOS https://t.co/FczDtwVEZ8 pic.twitter.com/BzxOlOxjkM

Gaming could provide a big opportunity for The Social Network, both immediately and into the future.

Back in December, a report from StreamElements showed that Facebook had seen a 210% YoY increase in hours watched via Facebook Gaming, boosting its game streaming market share to 8.5%.

That's increased even further during the COVID-19 lockdowns, with Facebook now seeing 380 million people engaging with gaming content on its platform every month, while the company is also leading the way on the next stage of gaming, in virtual reality. Given this, Facebook's presence in streaming could become increasingly important to the platform's overall growth strategy.

It still has a long way to go to catch the market leaders in YouTube and Amazon-owned Twitch. But Facebook still has plenty of opportunity to solidify its position, and its new gaming app will no doubt help it connect with even more gaming fans - even without its additional mini-games arcade.