A basic overview – Instagram users join groups which artificially inflate post popularity in order to increase reach. For example, a member of the group – or ‘pod’ – with publish a new post on Instagram, then all the members of the group will be informed so they go like and comment on it. The early velocity of activity tells Instagram’s algorithm that this is a popular post, which then sees it gain more reach in follower feeds and in Explore, boosting exposure.

This is the theory behind pods, an algorithm-busting solution – or ‘hack’, if you want to feel hip and down with the latest lingo – which helps you get more Instagram reach.

And it works, kind of.

As we’ve written previously, the problem with pods is that they take a lot of work (you have to engage with each post of each member of the pod, as it’s posted) and don’t necessarily guarantee reach beyond that initial group. So your numbers might look better, but your bottom line results – actual sales – may not improve. It depends on what you’re after, but the true effectiveness of pods is very debatable. But soon, Facebook may seek to truly resolve it once and for all.

According to BuzzFeed, Facebook has this week suspended several large groups “for helping hundreds of thousands of people trick Instagram’s algorithm into showing their posts to more people”. 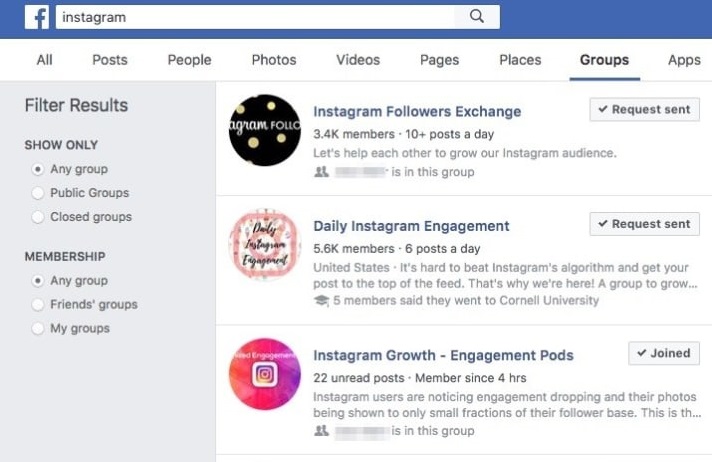 These groups are the extreme end of the pods movement, some numbering in the hundreds of thousands of members, though the actions within them are separated into smaller, sub-groups (you couldn’t possibly have an active pod of thousands or you’d never be off Instagram). And while Facebook only detected these groups after they were reported, it’ll likely trigger further action from The Social Network, and boost their efforts to stamp out such algorithm-gaming activity.

And it wouldn’t be hard for Instagram to detect such actions – if you see the same groups of users engaging with posts from the each other over and over, in rapid succession, it’s pretty clear that this is pod activity. Creating an algorithm to highlight such activity would be very simple. Basically, if you’re part of a pod, I’d suggest you might be risking account suspension, or even removal, in the near future.

Really, as noted, pods have been questionable practice anyway, in terms of results. If you're considering getting involved in a pod, or are already part of one, make sure you’re tracking your numbers beyond your vanity metrics (likes, shares, comments) in order to measure their real value to your business – and then cross check that against the amount of time you spend engaging with pod member posts each day.

Maybe you find it's worth it, but it could also trigger a response from Instagram and Facebook in the near future.

Seeking to game platforms always comes with a level of risk, but there will always be new options to try. If you go that route, then the penalties can be significant – make sure you’re measuring the rewards relative to this when weighing your options.