While Facebook has mostly kept Instagram and it's main platform totally separate since purchasing the image-based platform back in 2012, over the last couple of years, The Social Network has started to add in more ways to integrate the functionalities of the two apps. 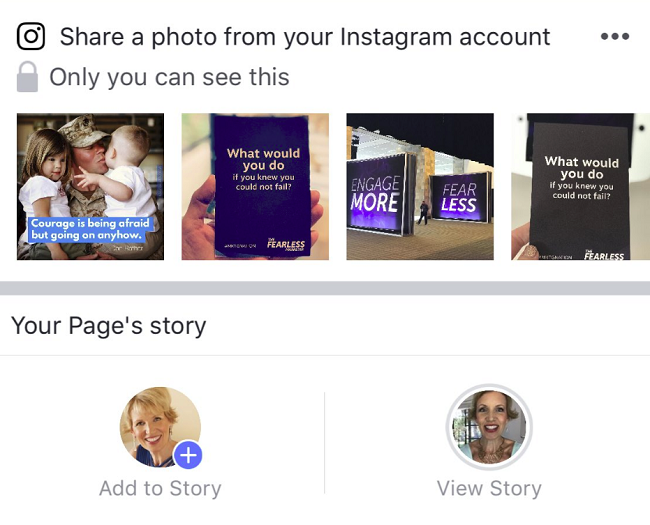 As you can see here, the new option highlights your Instagram posts within Facebook, including thumbnails, and gives you the chance to share them to your Facebook profile or Story, without ever leaving the app.

Given the rising use of Instagram, it makes sense for Facebook to offer cross-posting in this way - if you've already created the content, why not share it with your Facebook friends as well? And if you're already sharing it on your profile, why not your story?

That's the logical push here - Facebook Stories, which Facebook is still trying to get more people using, but Facebook has also reportedly had problems with original content sharing on their main platform for years. Maybe, by tapping into Instagram, they can help resolve this, while also minimizing the effort required on the part of the user.

As noted, while the two apps have remained separate, Facebook has been trying out more cross-posting and cross-integration options in recent times. You can now cross-post from your Instagram Story to your Facebook Story (though the process is a little jumbled between the various apps), businesses can access an integrated Messenger, Instagram and Facebook inbox, while it's also easy to now advertise on both Facebook and Instagram in each of your campaigns, without having to manually edit for each platform.

Given the popularity of both apps, it makes sense for Facebook to try to find ways to cross-pollinate their content stocks - but there is also a risk that Instagram could get tainted with the same privacy concerns that Facebook has been tagged with in more recent times.

Just this week, we've seen even more reports about how Facebook shared user data with Chinese companies, sparking another wave of regulatory concern. Instagram doesn't appear to be suffering any backlash from such issues, even though Facebook owns both. Underlining the linkage between the two apps could change that, so Facebook will need to tread carefully, and roll out any cross-posting options with that consideration in mind.

For brands, such integration should also be approached with caution. Just because you can cross-post from and to various social networks, that doesn't mean you should.

It may seem like a shortcut to regular content flow on each of your profiles, but what works on Facebook may not work on Insta, the same as what works on Twitter probably won't fit on LinkedIn, and so on.

You might have noticed this already with Facebook Stories - while you can cross-post your Instagram Stories to Facebook, they won't have the same functionality. So your viewers might be getting frustrated as they try to swipe up on your cross-posted Insta Story, or tap on a poll they can't actually vote in.

Each platform has unique characteristics and usage behaviors, and you need to consider this when transferring your updates across. It may be easier, but it will most probably not be better.

In the race for attention, you don't want any slip-ups in your process.