Amid varying levels of controversy around how facial recognition tools are, and could be, used, Facebook is looking to provide more control and reassurance to users in regards to how it utilizes your image.

In a new update, Facebook has announced that it's removing its current 'tag suggestions' setting, which relates to the prompts it generates based on people it can identify in an uploaded image, and improving its face recognition permissions, enabling users to opt-out of the process with one click.

Starting today, Facebook will begin sending out a new prompt to all users who have the tag suggestion setting activated, which will inform them about the change.

As you can see here, from the prompt, users will be able to easily switch face recognition on or off:

"If you do not currently have the face recognition setting and do nothing, we will not use face recognition to recognize you or suggest tags. In addition, features like Photo Review, which lets you know when you appear in photos even if you are not tagged, as long as you have permission to see the post based on its privacy setting, will not be activated."

And if you choose not to switch face recognition on, no more tags will be suggested based on your image.

"People will still be able to manually tag friends, but we won’t suggest you to be tagged if you do not have face recognition turned on." 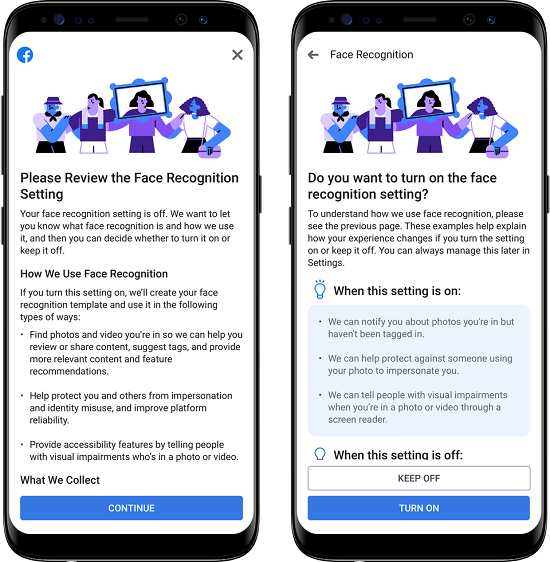 Normally, when Facebook has made changes like this, it has continued to track such data, but kept it from public view when such settings are switched off. In this instance, Facebook says that when you switch off face recognition, it will delete your face 'template' entirely. 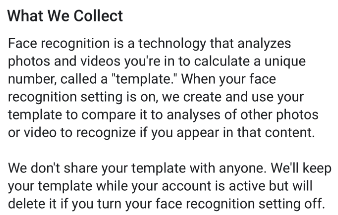 That's an extra privacy step - Facebook says that it has been working with privacy experts, academics and regulators in order to determine the best way forward with its face recognition technology. Clearly, Facebook is taking such seriously - with similar updates in the past, Facebook has vaguely worded its terms in regards to whether or not it would keep such insights on your personal file. Here, Facebook clearly states that it will not keep your face recognition info if you opt-out.

Of course, a lot of people will still keep face recognition on. While Facebook could, potentially, be giving up a source of added user data, Facebook also knows that, in general, people will choose convenience over privacy, and the benefits of being notified when an image of you is posted on the platform will likely win out in many cases. But it does show that Facebook is looking to give users more control, that it is willing to cede data, potentially, for the greater consumer benefit.

It's a good move for Facebook, especially, as noted, with concerns over facial recognition technology rising (just recently, protesters in Hong Kong were seen cutting down facial recognition towers to avoid detection). Facebook still has more data insight than any other platform on the planet, but moves like this show that Zuck and Co. are now taking their privacy obligations more seriously, and moving in line with shifting consumer sentiment.