In its latest attempt to increase on-platform engagement, Facebook's looking to utilize FOMO, by letting you know when your friends have read an article that's been shared on the platform. 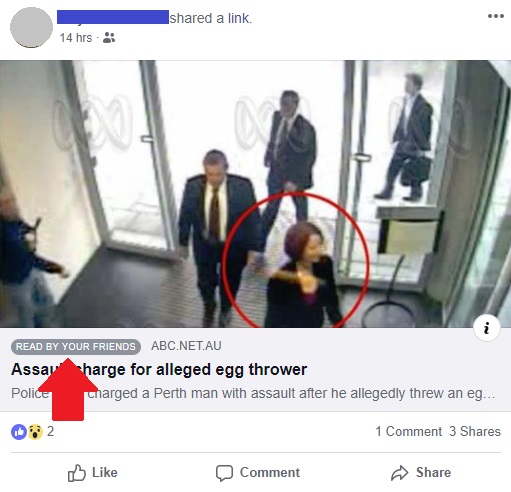 As you can see here, there's a new, highlighted note in the top line of the article's share link which notes that it has been 'Read by your friends'.

If all your friends are reading it, you wouldn't want to miss out, would you? You would want to read it too, so you can stay up to date with the relevant conversation, right?

That's the kind of push Facebook's going for - there's no further information available, and you can't click on the note to see which friends, specifically, have read it. But it lets you know that some people you know have, which could prompt more users to check out the same and ensure they stay up to date within their circles.

As noted, it's Facebook's latest attempt to increase engagement on the platform. While Facebook itself has continued to report growing active user numbers, various surveys have indicated that people are using the platform less and less, and the rising privacy concerns and related blowback have also sparked some to re-think the time they spend in the app, and the information they share. Along this line, Facebook recently noted that it will soon stop reporting separate active user counts for Facebook, Messenger, WhatsApp and Instagram, with a new 'Facebook Family of Apps' usage figure to be included in its quarterly reports.

It's difficult to know the absolute truth of this shift - Facebook has previously noted that it's seen no decline in active usage as a result of the various privacy issues. But Facebook also hasn't reported the amount of time users are spending in the app, so it could be that people are still checking in to Facebook, for example, but sticking around in the app for less time. In that sense, Facebook's scale could work against it - people spending a minute less, on average, in the app each month is no major concern, unless of course it's Facebook, and we're talking about 2.3 billion people spending 2.3 billion fewer minutes in-app. That is significant.

Whether this prompt will get more people clicking will be interesting to see, both for Facebook and for publishers. At this stage, it appears to be a small test, but if it works, it could boost Facebook referral traffic, especially for highly shared content.

That then leads to a larger question over how it might influence editorial decisions (do you gear your content more towards Facebook comments and shares to capitalize?), while on the other hand, it could also help to show users which posts are generating discussion despite people not actually clicking on the link and reading the detail.

We'll provide more information as it comes to hand.