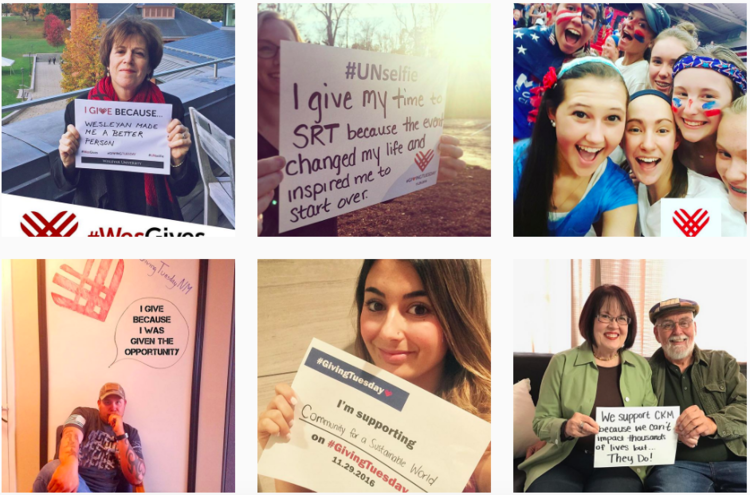 We've got a week to go until #GivingTuesday on November 29th. Hopefully, you've begun to strategize about how your organization will participate.

The folks who brought us #GivingTuesday have a few pointers. They say that many nonprofits are rebranding #GivingTuesday for their own organizations. "From #GivingShoesDay to #GivingZooDay, give a twist to our name and logos to promote your brand and mission."

Want to know how other organizations were able to leverage #GivingTuesday to engage their audiences? We've rounded up a few case studies and suggestions on how to try out their successful strategies.

In 2015, ORGANIZE, an online organ donor platform, asked people to "Give with your Heart" by registering as organ donors online on #GivingTuesday. "They organized Twitter Chats, graphics, and materials to educate and encourage organ donation," according to the #GivingTuesday website.

Their efforts earned more than 40 million impressions and registered thousands of Americans as organ donors. It was by far the biggest digital donor drive in U.S. history.

ORGANIZE is very much a digitally based organization. Their website boasts that they can register you as an organ donor in about 47 seconds. And they are advocating for every state in the U.S. to recognize social media posts as evidence of donor wishes. What action can people take online to participate in your organization?

Also, ORGANIZE asked for people to take action rather than to give money. When everyone else is asking for donations, is there something else you can ask for?

Big Brothers Big Sisters of Southwest Washington ran a "BIG Bail Out" on #GivingTuesday. They locked two county sheriffs in a cell at the local mall. Then they asked the community to donate in order to "bail" them out.

Creating a real life event that is easy to share online is a great way to engage with your audience on #GivingTuesday. A playful event like the "BIG Bail Out" could provide fun, possibly even viral, images.

Community Missions in Niagara, NY, planned the renovation of their local food pantry for #GivingTuesday 2015 and more than 120 volunteers participated in the event. Organize a volunteer project and invite donors, employees, and neighbors to celebrate giving with a day of service.

The idea of the competition came from a Monday Night Football game between the Browns and the Ravens. "Together, the libraries raised more funds for their respective programs, earned greater social media followings, and created a new model for collaboration that benefited both communities," according to the #GivingTuesday website.

Creating a "rivalry" between two communities to see who can fundraise the most can be a entertaining way to partner with another organization. And competition can be a motivator for employees, volunteers, and donors alike. The best part? Everybody wins.

In 2014, the Alameda County Community Food Bank used a multi-channel approach to #GivingTuesday, including email, website, digital ads, and social. "Planning started about six weeks before #GivingTuesday, but activation went into high gear during Thanksgiving week. Their big vision can only be realized with strong donor support, and ACCFB inspired people to donate more than $100,000 (online and offline) on #GivingTuesday," according to the Network for Good. They created a visual badge for all #GivingTuesday communications and asked a corporate supporter to provide matching funds for the first $20,000 raised.

Go all out. Use all your channels. Try using visuals to unify your campaign across channels.

What Should You Do with Your Own #GivingTuesday Success Story?

Spread the word by sharing your story. In December, reach out to press outlets in the community. You can also share your #GivingTuesday stories with [email protected].

This post first appeared on the Ignite Action blog.