Google is Simplifying its Ad Auction with a Single Bid Process

In an effort to simplify its ad buying process for display and video ads sold via Ad Manager, Google has announced that it's moving to a new "unified first price auction" process. 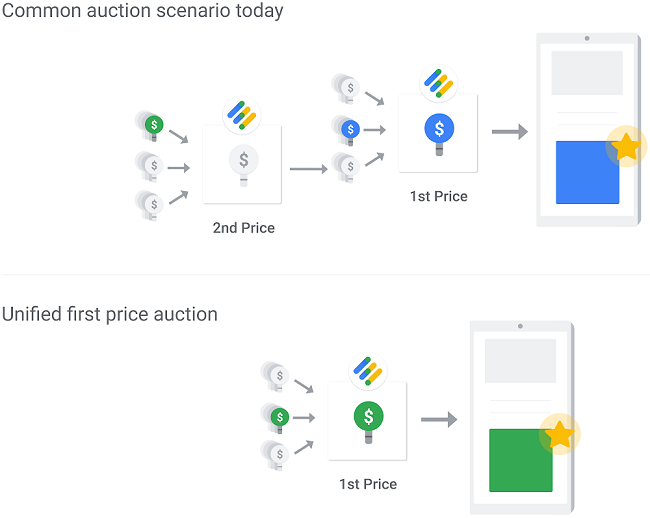 "In the very early days of programmatic buying, publishers typically used only one auction to sell their ad inventory. Today the programmatic ecosystem has evolved into a much more complex marketplace where a single ad can pass through a mix of over ten different auctions, with different rules, before a winning bid price is selected and an ad is served. This complexity has made it difficult for advertisers and agencies to properly value programmatic inventory and it has driven our publishers and app developers to implement increasingly complicated ad monetization strategies, reducing transparency across the industry. Further, the increasing intricacy of programmatic has made it operationally very difficult, even for experts, to determine what’s going well and what needs to be improved."

As demonstrated in the above diagram, the new system aims to simplify Google's ad bidding process, and make it easier for businesses to both understand and maximize their Google Ads performance. By streamlining the ad auction, ad buyers will be able to more accurately account for their ad spend, and relative results, while it'll also make it easier to explain to others what ad bids have lead to each outcome.

Google expects the change to be in place by the end of the year, leaving time for buyers and sellers to make changes in their programmatic strategies in line with the update.

Google does make specific note, however, that the new process will not apply to all of its ad products.

"It’s important to note that our move to a single unified first price auction only impacts display and video inventory sold via Ad Manager. This change will have no impact on auctions for ads on Google Search, AdSense for Search, YouTube, and other Google properties, and advertisers using Google Ads or Display & Video 360 do not need to take any action."

The move makes sense, reducing complexity in the ad buying process and making it easier for businesses to better track and attribute performance. It may also enable more businesses to get a better understanding of their ad options, and how they can improve their Google ad results.