This seems to be a significant, yet largely buried element within Google’s TAG Bulletin reports, which provide an overview of all of the coordinated influence operations that its team has detected and shut down over time.

As we reported back in May, at the time of Google’s Q1 TAG Bulletin, Google removed more 31,000 YouTube channels linked to Chinese-based influence operations between July last year and March 2022, a huge amount, which far outweighed any other element.

And today, Google has shared its Q2 Tag Bulletin, which, along with its various efforts to combat Russian-backed misinformation efforts about the invasion of Ukraine, also details that it shut down another 7,169 YouTube channels linked back to China in the last three months.

For comparison, Google removed 231 YouTube channels, in total, in connection to the Ukraine conflict.

Which is the explanation Google has provided for all of these removals, a templated, and somewhat vague summary of what’s going on with these channels.

So what is going on, exactly?

There’s not a lot of detail provided, but it seems that the main purpose of these channels is to first build an audience in the app by posting engaging, light content, which grabs viewer attention. The channels then eventually use that reach to sprinkle in some pro-China sentiment, in order to seed such among broader audiences.

That then enables the CCP, and/or related groups, to potentially sway public opinion through subtle means, by gently nudging these viewers towards a more positive view of China’s activities.

And the scale of the operation is significant – in total, over the past year, Google has now detected and removed more than 50,000 YouTube channels (not individual videos, mind you, channels) connected to this effort.

That’s a lot, and if you look at the data, the program seems to have ramped up significantly this year, which likely suggests that whoever is behind it sees YouTube as a powerful vector for influence. 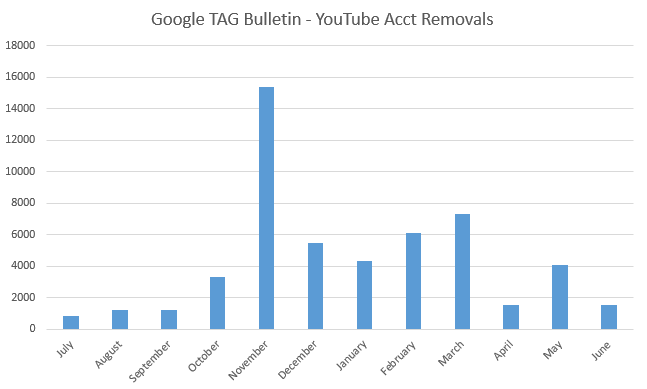 The data further underlines the importance of social platforms taking proactive, definitive steps to stop such programs before they can gain traction, while also pointing to how state-based actors are looking to utilize the scale of social networks to influence global opinion.

Which is also a concern linked to the rise of TikTok, with many security experts warning of the potential dangers of the Chinese-owned app gathering information and/or enabling pro-China narratives to proliferate.

Indeed, TikTok has come under scrutiny on several occasions over its perceived efforts to suppress anti-China content, and with recent analysis also showing that the app is becoming a key news and information resource for younger users, that may well become a bigger issue over time.

Add to this the fact that the Chinese Government continues to clash with other world leaders, on various fronts, and there’s clearly reason for some concern there.

And with pro-China groups also looking to infiltrate YouTube at this scale, there does appear to be some important trends emerging within the broader flow of news and information online.

We’ve asked Google for more information on exactly what’s going on with these YouTube removals, and we’ll add to this story if/when we hear back.

UPDATE: Google has referred us to this Twitter thread, on a China-linked group named DragonBridge, for more context on the removals.