Published May 13, 2020
By
Andrew Hutchinson Content and Social Media Manager

Group live-streaming app Houseparty is using a three-day, virtual 'In The House' festival, which includes a range of celebrity guests, to showcase its latest co-watching feature update.

Houseparty is throwing a BIG in-app event featuring all your favorite stars and celebrities on May 15th through the 17th. @aliciakeys, @DojaCat, @sanbenito, @DaBabyDaBaby are #InTheHouse and performing, only on Houseparty!

I mean, that's obviously not the only reason - with Facebook and YouTube running star-studded graduation events for the Class of 2020, Houseparty, which is primarily used by young students, is also looking to get in on the same.

As you can see here, Houseparty co-watching enables users to gather together to virtually participate in video events as a group. As noted by TechCrunch, Houseparty first showcased the option last week with a virtual prom event hosted by DJ D-Nice. 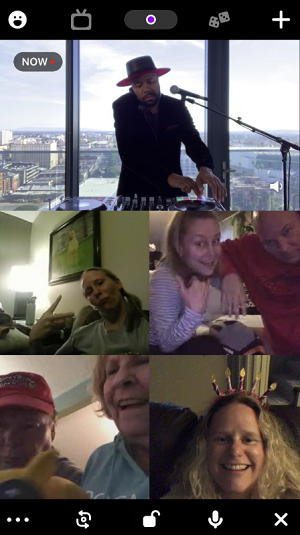 With in-person events off the cards for the foreseeable future due to COVID-19, connecting via streaming video is the closest replacement we have, and co-watching adds another element to that engagement. Instagram recently added a similar option, which enables users to scroll through an Instagram feed while on a group chat, while Facebook has its Watch Party option, which it launched in 2018.

As such, the feature itself is nothing new, but the fact that Houseparty is looking to branch out into new engagement options could point to new opportunities within the app.

Houseparty, like virtually all video streaming apps, has seen a big jump in usage during the COVID-19 lockdowns. According to The Financial Times, the app was downloaded 2 million times in the last week of March, compared to around 130,000 in the same week a month prior. Houseparty has also ranked in the top ten in the App Stores of 17 different countries over the last two months, and it now looks to be using that increased attention to maximize its appeal.  ​

In terms of use case, co-watching could be another option for brands to consider to help connect with younger audiences, particularly during the pandemic. It may also be another streaming platform to reach - you could, theoretically, set up multiple devices and stream to several platforms at once, in order to see what results you get.

It'll be interesting to see how many people tune into Houseparty's 'In The House' event - and worth noting, Houseparty owner Epic Games recently hosted some 12.3 million people in a major live-stream concert event, with Travis Scott performing within Fortnite.

This, clearly, is the way of the immediate future for events, and given the rising interest, it could also provide new opportunities moving forward.

Houseparty is building experience, and capacity in this respect, which may be worthy of note in your strategic planning.