Instagram’s testing a new way to raise awareness of social causes in the app, with an additional pop-up on the hashtag search pages of selected movements which prompt users to help spread the word in various ways. 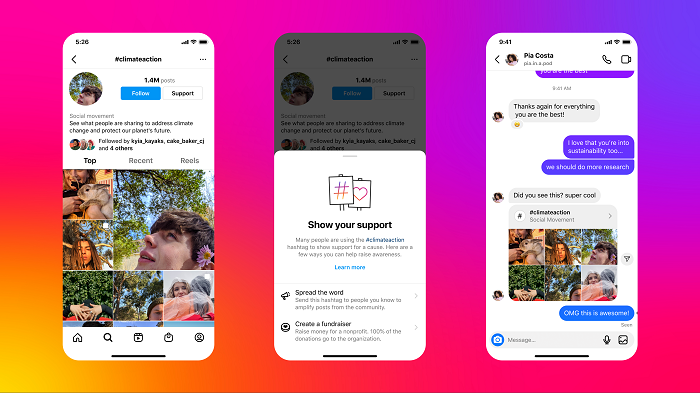 As you can see in these images, now, when you search for certain cause-related hashtags, a new pop-up will ask if you’d like to either share the hashtag page with your connections, or create your own fundraiser for the cause, with 100% of donations going back to the relevant organization.

That could be a great way to prompt more direct action in the app, with interested searchers more likely to want to do their part.

“Hashtags have long been a place where people discover new causes to support on Instagram, and now when you search for specific hashtags associated with certain movements, you’ll have the option to support them.”

Instagram says that many users have requested more direct ways to support charities, while it also consulted with a number of organizations on the project to ensure that it was taking the best approach to amplify relevant movements.

“We’re rolling this out first to a handful of hashtags that are focused on popular and long-standing movements on Instagram and in the world, like #BlackLivesMatter, #womensrights and #climatecrisis.”

As noted, it could be a great way to raise awareness of each movement, while also making more users aware of Instagram’s charitable donations feature, which enables anybody to promote a charity relevant to them via their profile and posts.

Instagram has been working to add in more donation-type features, including charity fundraisers, personal fundraisers (which have now been removed), as well as tipping and creator funding tools. Aside from assisting relevant causes, the options also get users more accustomed to transferring funds in-app, which further leans into its expanded eCommerce push.

So while the main motivation is altruistic, there is a commercial element too – but either way, with reach to over a billion users, providing more ways for people to raise awareness of causes in the app can only be a good thing.

The new prompts are being tested with some causes from today.