In amongst the announcements related to their new video platform IGTV, Instagram also included another significant piece of news – the platform has now surpassed one billion monthly active users.

For those keeping track, that now puts Instagram clearly into the top social apps, in terms of users, and makes it Facebook’s fourth billion-user platform. 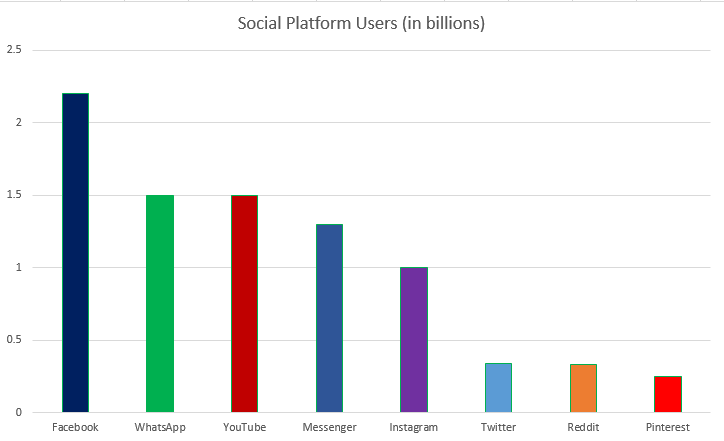 You may note that both Snapchat and LinkedIn are not listed here – Snapchat only releases daily active user stats (191 million), and LinkedIn lists total members (562 million). Neither publish official MAU counts.

Instagram’s come a long way since being acquired by Facebook back in 2012 for $1 billion. At the time, Facebook was criticized for spending so much on the then basic image sharing app, but Instagram is now estimated, by some projections, to be worth around $100 billion, with the platform slated to generate around $5.48 billion in U.S. ad revenue in 2018 - up 70% year-over-year.

That ad potential will only be boosted by their latest video efforts, while the growth of Instagram Stories has also broadened the app’s potential beyond what anyone could have anticipated.

Indeed, with the addition of Shopping Tags and other eCommerce related tools, Instagram is on track to become a major player in digital marketing (if it’s not already), while the platform’s growth momentum has also held firm – the platform’s 5% quarter-over-quarter user growth rate is better than Snapchat and Facebook.

And that’s where Instagram has provided some of the most significant benefits for Facebook – in beating out a potential rival in Snapchat. Snap saw huge increases in popularity amongst younger users, which is a key demographic as an indicator of future potential. But Instagram, through Instagram Stories, has helped quell the Snapchat threat, stealing most of the app’s best features and then making them available to its much larger audience base.

Now, more people would be aware of these Snapchat-like tools through Instagram, and with Facebook advancing its AR tools every day, Insta is on track to become the clear leader of the pack for such – and a clear winner in usage among younger audiences.

And as noted, that also opens up significant opportunity for brands. With younger users turning away from Snap, particularly after its recent redesign, Instagram is looking to step in with new features, like IGTV, which keep them on a Facebook-owned property.

What was once a criticized deal is now seen as a stroke of genius from Zuck and Co, and as Instagram’s offerings expand, it’s only set to become more important.