They've been working on it for some time, and now, Instagram is officially launching its new music stickers with lyrics option, which displays the song lyrics on screen, enabling users to sing along. 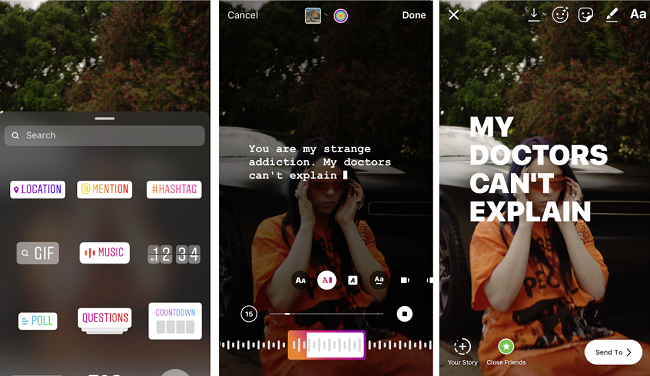 The option was first spotted by reverse engineering expert Jane Manchun Wong back in March, with several variations appearing in the back-end code since.

As you can see in this example, the lyrics will appear alongside your video - in this instance, Wong has used the actual video footage of the singer, but you can also video yourself singing along, adding an extra creative element to your Instagram Stories.

As noted, the option may help Instagram fend off rising competition from TikTok, which has become popular among younger audiences largely due to its short, music-themed videos.

Similar to Vine, the short video format of TikTok lends itself to music clips. Vine was able to fuel the careers of several musicians through viral trends, and TikTok looks to be filling that same gap. Instagram will be hoping to negate some of that with additional music options, but it's hard to see them knocking TikTok off course entirely, given the app's rising usage.

But it is likely that music stickers with lyrics will be popular. Given the trend of music-related clips, you can imagine that the capacity to overlay meaningful lyrics will add a little extra to Instagram Stories. TechCrunch notes that TikTok has also added a new text overlay option as well, though it's fairly basic at this stage.