After Instagram first announced that it was testing the option back in May, the platform has today confirmed that all users can now pin up to three comments within their post interaction streams.

That means you can a pin a few comments to the top of your feed post. By highlighting positive comments, you can better manage the tone of the conversation. ❤️ pic.twitter.com/w2X5grdee7

As noted by Instagram's VP of Product Vishal Shah, the option is designed to encourage more civil discussion by "highlighting positive comments", though how much difference that will make in practice remains to be seen. 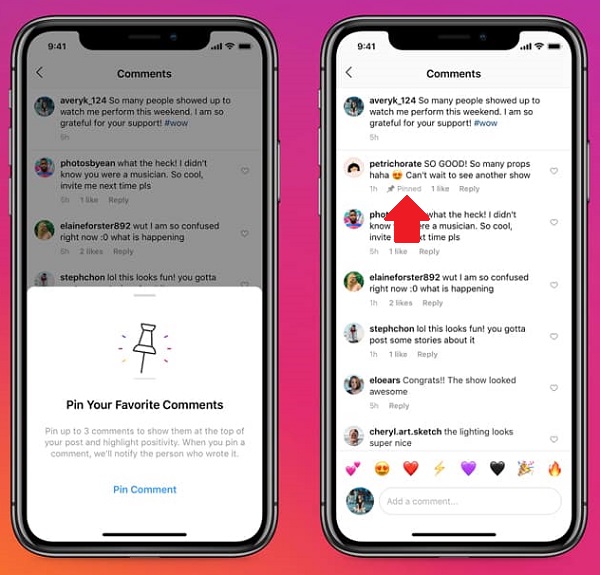 The original concept, which was first spotted in testing back in April, was announced along with a range of features designed to give users more control over their Instagram interactions, including the capacity to bulk delete comments, and options to limit who can tag or @mention you in their posts. In this context, comment pinning is most certainly focused on steering the conversation - but why that would stop someone from posting something negative is difficult to say.

Maybe they'll see the pinned comments and re-think firing away, because they'll get less exposure for their remarks by not getting into those top three comment slots? Maybe users will go to more effort to post similar comments as those that are pinned, in the hopes of also getting that pin recognition (more geared towards celebrity accounts)?

The option will obviously be varyingly beneficial based on account size and engagement - but for brands, it could be another way to highlight top responses, in order to both recognize enthusiastic members of the community and highlight positive engagement.

It could also be a great way to amplify common questions and answers. If someone asks a good question about your product, you could pin it, then reply, helping profile visitors get more context.

There is, of course, also a risk that by pinning the most positive comments, you could be seen as trying to bury more critical remarks, but used with caution, and sensibility, there's a range of options to consider.

The new option is available to all Instagram users globally.