Instagram is testing out a new format for the display of Stories on the desktop version of the platform, which is designed to make it easier to scroll through the various Stories from the profiles you follow on the bigger screen. 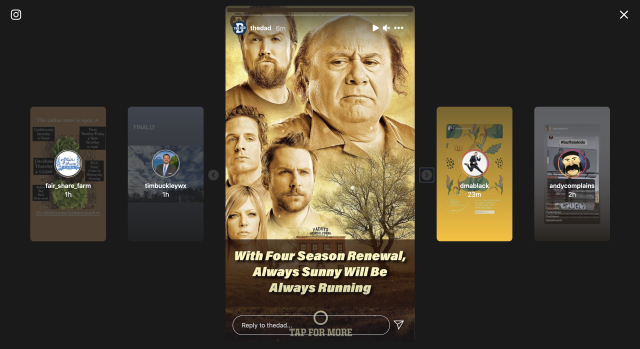 As you can see in this screenshot, posted by Engadget, the new format presents Stories in a carousel, as opposed to a single Story frame taking up the screen. That makes it easier to flip through your Stories stream in a more dedicated, Stories-focused way.

Which is likely in-line with usage trends. Over time, Stories have become increasingly popular, even superseding the regular news feed in terms of engagement. As such, it seems likely that, at some stage, Instagram will put more focus on Stories over the main feed, at least as an option, which could eventually see the app open to Stories, like TikTok does with its full-screen feed of video clips, making it the key function of the app.

That's speculation at this stage, we have no information from Instagram which suggests that this is in the works. But this new desktop layout seems to align more with that approach, enabling users to focus entirely on Stories, separate from the main news feed.

Instagram has been working to update the desktop version in recent times, adding DM access back in 2019, and providing the capacity to view IG Live streams from your home PC last April, amid rising usage during the pandemic. Streamlining Stories consumption is another element in the evolution of its desktop offering, which will also provide more capacity for users in different regions, and with different levels of connectivity, to maximize their Instagram experience.

That could be particularly important in places like India, where Instagram is pushing to increase its presence as part of Facebook's broader moves to ride the Indian tech evolution.

An Instagram spokesperson has confirmed the new desktop Stories test, which is now available to a small group of users. No word on a broader roll-out at this stage.