LinkedIn Engagement Continues to Rise, According to Latest Update from Microsoft

While it's a little annoying that we don't get the same, specific LinkedIn performance updates that we used to before the company was purchased by Microsoft, Microsoft does still include notes on how LinkedIn's doing within its quarterly updates - and it is worth noting such, especially for digital marketers.

This week, Microsoft released its FY19 Q3 results, which showed that, aside from Microsoft increasing its overall revenue by 14% to $30.6 billion, LinkedIn has continued to see rising levels of on-platform engagement. 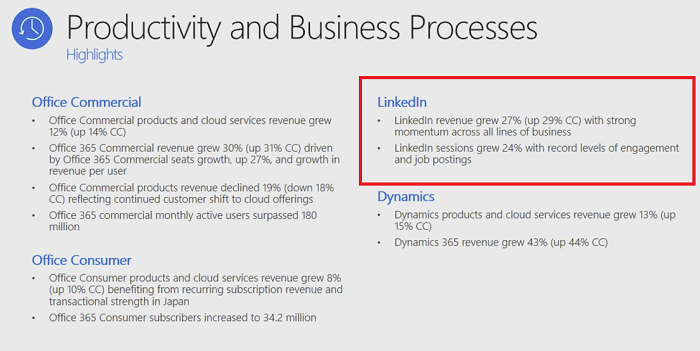 As you can see here, Microsoft reports that LinkedIn's revenue has increased by 27% for the quarter, while the platform continues to see 'record levels of engagement', with on-platform sessions growing by 24%.

Couple that with LinkedIn recently reaching 610 million members and the signs look positive for the platform - even if the surrounding discussion of additions like its own variations of Stories, post Reactions, and other replicated social media functions has been largely critical.

You may not like them, but it's possible that LinkedIn knows something you don't. Definitely, the above-noted engagement stats suggest that the company is looking in the right direction.

The long-standing question on LinkedIn engagement, of course, has been actual active users, as opposed to total members. Unlike other social platforms, LinkedIn has never shared any MAU stats, but speculative math by some observers has suggested that only around 25% of LinkedIn users are regularly active in the app. That, at present, would put LinkedIn's MAU count at around 153 million MAU, which would be more than Twitter's new 'Monetizable Daily Active User Count' of 134 million.

How much that's relevant is a matter of perspective - definitely, going on the top-noted figures, and anecdotal evidence, LinkedIn engagement is rising, with algorithm and functional improvements keeping more users on platform for longer, and prompting more to check back with the app more regularly.

That's important to note for digital marketers. With many businesses looking to offset the steady declines in Facebook reach, other platforms are getting more focus. LinkedIn looks to be capitalizing on this by rolling out improvements quickly, and providing new options for company page updates.

If you've not checked in with LinkedIn recently, it may be worth another look, and some additional consideration in your digital marketing planning.