Following on from its initial launches of LinkedIn Stories in Brazil, the Netherlands and the UAE, LinkedIn users in Australia can now also access the new, vertically-aligned, temporary status update option.

As you can see in this sequence, LinkedIn Stories, which the company confirmed were coming back in February, function pretty much the same as they do on Facebook and Instagram, with a Stories bar along the top of the main feed, and various stickers and tools available to decorate your Stories frames.

When you first access a LinkedIn Story, you're prompted to check your privacy settings for Stories viewing.

That aligns with LinkedIn's regular capacity for users to see who's viewed their profile - if you don't want people to see that you've checked out their LinkedIn story, you can switch this off via your Story settings.

LinkedIn provides three alternatives on this front - when you view a Story, the Story creator will see either:

So you do have the option to view LinkedIn Stories anonymously if that better suits.

The Stories creation stream is fairly straight-forward - take a photo/video, add stickers and text, then publish. 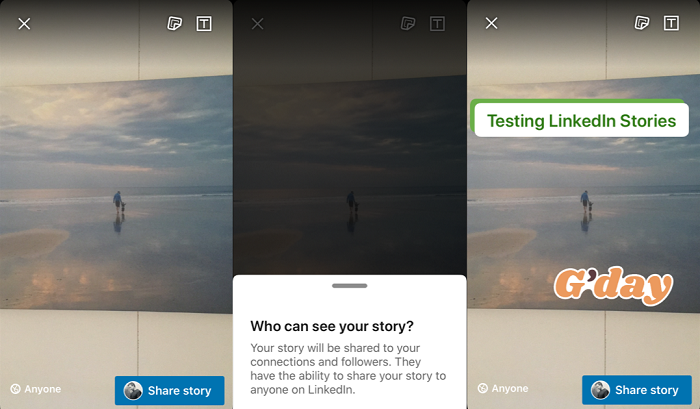 As you can see, they've even added localized stickers, like 'G'day', for the Australian launch.

The expansion, as noted, means that Stories is now available in four regions, with LinkedIn adding another nation every few weeks. Given the amount of users who now have access to the option, you would think that LinkedIn would have enough usage insights to roll it out to all users, but we'll have to wait and see how the platform decides to introduce the option to more regions.

LinkedIn Stories has already received a lot of criticism, with many people suggesting that it doesn't fit with the professional communications focus of the platform. But the introduction of Stories does make sense. Broader engagement data shows that Stories is increasingly how the next generation of social media users are communicating, in preference to the traditional News Feed, and as such, leaning into the evolving trend seems like a logical way to go to maximize engagement and interaction.

Really, if you don't like it, you don't have to use it, but there will be a lot of LinkedIn users who do warm to the option, and it could provide a range of new opportunities to connect with your target audiences, and share a different perspective in the app.

NOTE: We've had independent reports that LinkedIn Stories is also available to at least some users in Qatar and Germany. LinkedIn has not confirmed this - the only regions where the option is officially available at this stage are as noted above.