If you use LinkedIn's Sponsored Content, you may want to take note.

In a new blog post, the professional social network has flagged a set of upcoming tests and changes aimed at improving the offering, but which may also see some significant changes in your performance data.

"At LinkedIn, our goal is to help you reach your marketing objectives with high-performing campaigns. To that end, in the coming months we will test and roll out a series of changes to Sponsored Content that are designed to help you generate higher-quality clicks on your ads and improve campaign ROI."

I mean, that's what you'd expect the tests to be about, making their ads better - but there's also this slightly concerning note included in the bottom of the post:

"With these changes, you may notice a decrease in campaign click-through rates or an increase in your CPC compared to your historical averages. However, we expect you will see better ROI from your campaigns overall because you’ll find a greater share of your paid clicks coming from people who intend to visit your website, engage with your content, or send you their contact info."

Right. So your performance stats may look worse than before, but they won't be. It'd probably be worth keeping an eye on your data to confirm this for yourself.

And definitely, if LinkedIn's first announcement on this front, also included in the post, is anything to go by, it's not going to lead to ground-breaking changes - though maybe improvements in LinkedIn's currently problematic system. 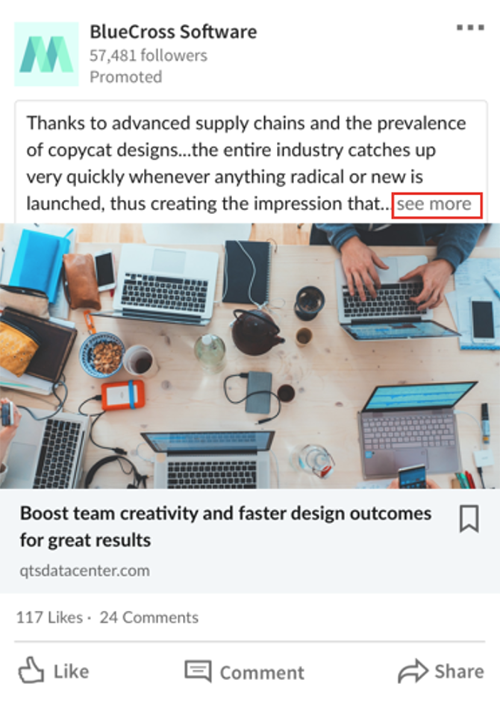 So, you won't have to pay for people who click on your ad, but who don't click through to your site. Which is how it is right now - LinkedIn's 'billable clicks' don't include simple clicks on post text. You'll also see lower click-through rates for your ads - but as LinkedIn notes, you will likely get more informed, more likely leads, as they won't be duped by tapping on the 'see more' prompt and being filtered through to your landing page.

But the framing is a little weird. Now, it's free for people to tap on 'see more', which it should have been anyway, if not for LinkedIn's outdated system.

Regardless, this fixes an issue, and with Sponsored Content being the key ad revenue stream for LinkedIn, it makes sense for the company to seek to improve its performance with new options.

We'll keep you updated on any further changes from LinkedIn.