LinkedIn, which is currently seeing 'record levels' of engagement, has this week announced another milestone, reaching the new high of 660 million members worldwide.

LinkedIn's leading nation in terms of membership remains the US, where it's added 8 million new members since February, while it's also seeing significant growth in India (+7m since Feb) and Brazil (+3m). LinkedIn is also the only major western social media platform that's able to operate in China, where the platform now has 48 million members.

LinkedIn has seen improved performance across the board since being purchased by Microsoft back in 2016, with its user base increasing by more than 50% since that time. It also continues to improve its revenue numbers, and as noted, drive improved engagement.

And while total members is not the same as active users - a criticism often raised in regards to LinkedIn's 'total members' data point - the combination of more people signing up, along with better engagement levels, underlines LinkedIn's evolving efforts to get users more active, and engaged on its platform.

At the same time, and amid various controversies at other social platforms - LinkedIn has this week outlined its 'guiding principles' which it adheres to in order to ensure that it makes "the best possible decisions to protect our members and maintain their trust".

LinkedIn's four guiding principles, in addition to its foundational value of 'Members first', are:

Of course, given that LinkedIn is the professional social network, its members are less likely to be as controversial or confronting as they may be on other platforms, but LinkedIn has managed to largely stay out of the various issues and concerns that have caused major headaches at other platforms of late. LinkedIn has also always been very cautious with its data access - largely to preserve its value - and that's helped it to steer clear of some of the same data usage problems others have seen.

These announcements also come after LinkedIn was recently named the most trusted social platform for the third year running in Business Insider's 'Digital Trust Report'. 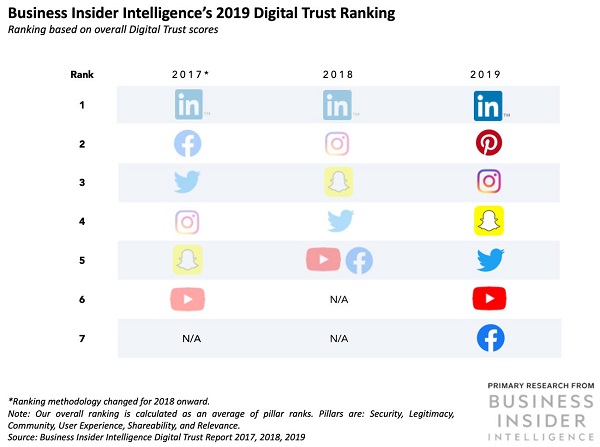 Facebook has certainly plummeted quick. The results are based on a survey of 1,974 people who were asked to rank the seven major social networks on six pillars of digital trust - Security, Legitimacy, Community, User Experience, Shareability, and Relevance.

In many ways, it's not surprising to see LinkedIn come out on top based on these categories - and while, as noted, the platform likely has fewer issues to deal with on these fronts, its performance on each is also by design, with LinkedIn working to maintain its various security and protection measures.

More users, more engagement. It may well be worth giving LinkedIn a closer look for your digital marketing efforts in 2020.